Her primary objective as HM Trade Representative for Africa was to promote UK trade with Africa, to support trade and investment and to expand business between the Uk and the African continent, said Emma Wade-Smith OBE, the speaker at the meeting last week.
Emma is wrapping up her job here after five years in South Africa and will soon be moving to New York as British trade representative in North America and UK consul-general in New York. 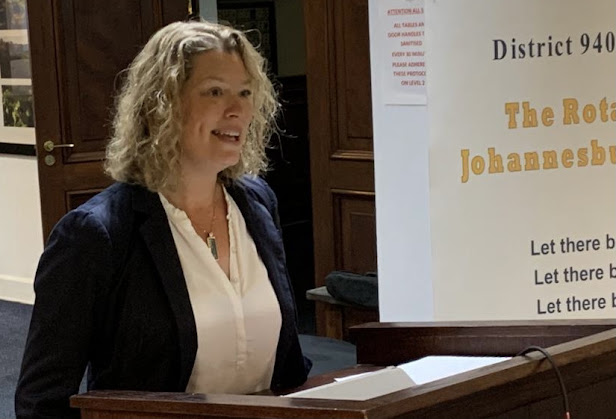 Emma Wade-Smith addressing the meeting
She thoroughly enjoyed her time in South Africa, but Covid threw up many challenges, she said. Before March 2020 her job consisted to some degree in receptions, breakfasts and other less formal gatherings. Covid changed all that and she and her team were faced with the real challenge of trying to contact people all over Africa to put them in touch with British business leaders and potential investors.
She said the UK government has been working hard to promote free trade agreements all over the world post-Brexit and emphasises a strong development angle to the free trade programmes involving Afric.
"Trade instead of Aid has has become a strong mantra," she said. 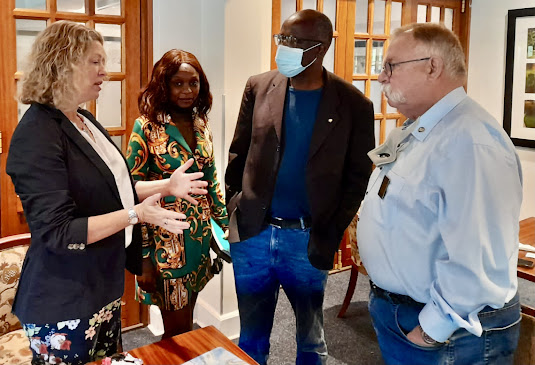 Emma discussing trade matters with Nola Ostle, Paul Kasango and Jankees Sligcher
South Africa is the UK's largest trading partner in Africa, but Covid has slashed trade levels by almost two thirds. The UK has invested some £50 million in Africa, while South Africa has investments of about £3,5 million in the UK. South Africa ranks 27th largest trade partner of the UK.
Africa is in recession for the first time in a generation because of Covid, but "we're starting to see some green shoots of recovery. There are really exciting possibilities" for trade between the UK and Africa, she said.
"It has been an enormous privilege to have lived and worked in this beautiful country."

Gavin Atkins, Amina Frense, Sean Schoombie, Helene Bramwell, Olivia Schoombie, Linda Vink, Janice Atwell, Wendy Challis and Nola Ostle formed one of the groups at the assembly
The week started off with a club assembly on Saturday, attended by about half the club's members. Club assemblies are held three to four  times a year and are meant to give the club an opportunity to consider the broader picture about where the club is going.
President Ian Widdop divided those attending into three groups and each considered three questions: what is working, what is not working and what, if anything, would you change about the club.
This led to some heated exchanges and some very interesting perspectives. A group of six people, two from each group, will take the discussion forward with Ian.
Upcoming meetings: The meeting tomorrow morning will be about the prospect of applying for global grants for Copessa and Donate a Loo and the final arrangements for the Golf Day on Friday.
The District Governor, Stella Anyangwe of the Rotary Club of Pretoria West, attended the monthly New Dawn council meeting on Tuesday morning. DG Stella will be the main speaker at the meeting next week, 20 October.
A visit to Copessa is planned for the meeting on 27 October, most likely for later in the morning than 7am. Karlien Kruger will give us the details.
And finally, good luck to those taking on the Rotary Club of Rosebank in a quiz tomorrow evening. They beat us last time out, so there's a sweet smell of revenge in the air. Carol Stier has the details.
A Thought for the Week: Every time I see an adult on a bicycle, I no longer despair for the future of the human race. - H.G. Wells (1866 - 1946)