The Shattered Dreams of Abused Kids

Instead of talking about herself and her career as other members have done over the past few months, Karlien Kruger opted to use her turn at the microphone at the meeting this week to bring the club up to date with developments at Copessa, the NGO tackling child abuse and gender based violence in Soweto that she has been consulting with for the past more than two years.

Karlien estimates that she and fellow club member Gavin Atkins have done the equivalent of R335 000 worth of consulting for Copessa (Community-Based Prevention and Empowerment Strategies - South Africa) led by the inspiring medical doctor Dr Nobs Mwanda. 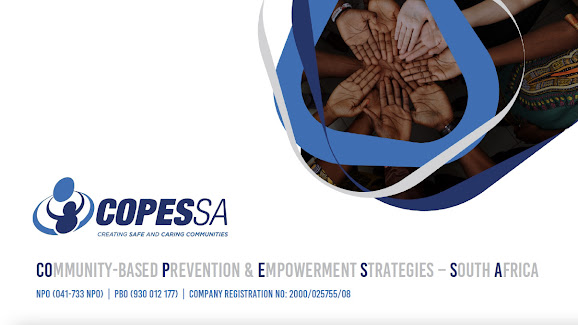 Copessa deals with the aftermath of violence against children and child abuse, and more recently gender based violence, and attempts to prevent conditions that can lead to violence.

Karlien and Gavin's efforts have revolved around putting proper administrative structures and practices in place to help the organisation to run more smoothly and enable it to concentrate on projects and fundraising. 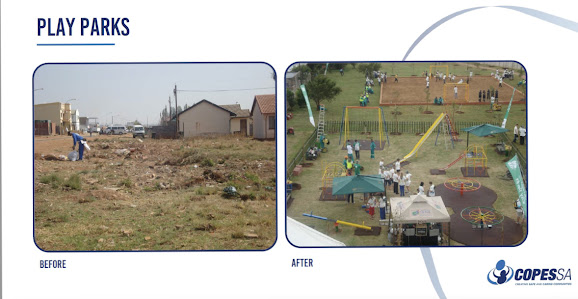 These projects include a soccer league designed to keep mostly young boys off the streets and transforming dumps where children are often in danger, into play areas, a holiday schooling programme, a library unit, a sewing project for women and health parks, amongst many other efforts.

When the successive lockdowns started at the end of March last year, Copessa also set up a feeding scheme distributing food parcels and have started a garden project for food security to address poverty. This has been so successful that they are already supplying the local Pick n Pay with fresh vegetables. 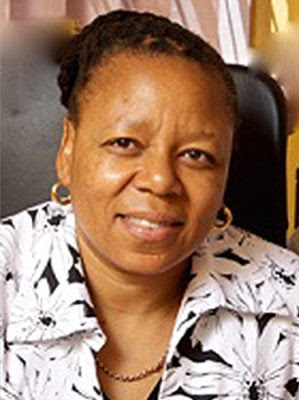 These are all major achievements given that raising funds for all their efforts has become more and more difficult over the past almost two years, something that we at the Rotary Club of Johannesburg New Dawn know only too well.

With the work that they are doing, Copessa is a prime candidate for a Global Grant (along with Donate a Loo), something which President Ian Widdop will be addressing over the next few months with input from club members at a Global Grant meeting for which we've set a Wednesday meeting aside during October. 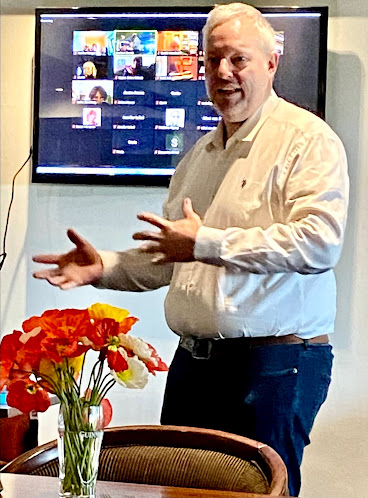 Hannes Dressler told the club that by next month he and  his wife Katya will have been in South Africa for three years. They're unfortunately leaving South Africa at the end of the year as Hannes's contract with SAP in South Africa has expired and he'll be deployed elsewhere, although he doesn't know where yet.

Hannes told how he'd seen the New Dawn sign up at the Parkview Golf Club soon after arriving in the country and decided to pay the club a visit. A hearty Guten Morgen! from Graham Donet and a genuine greeting from fellow German Frank Odenthal, who has since left the club, sealed the deal for him and he joined soon afterwards.

Hannes had met Katya when he moved to Moscow where she was HR head at KPMG and introduced him to the company and country. He says although they were expecting a posting in Europe, America or other similar places he was given the option of China, India or South Africa.

They were sent on a scouting tour of South Africa and both immediately decided this is where they wanted to be.

He said South Africa is in many ways similar to Moscow, where you have to be a member of the inner circle, whether in the country, in your community or club to be anyone. Rotary has, however taught him that the more open you are as a club or community, the better ideas you get and the more creative you can be. 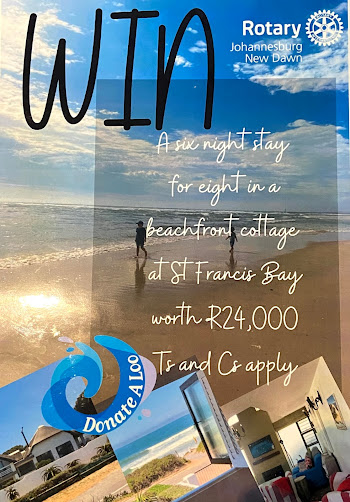 Hannes also pledged 4 bottles of the finest whisky from the Bottega Café Whisky Club in Parkhurst as a first prize for the Golf Day coming up on Friday, 15th October, as well as a case of wine.

The Golf Day is in aid of Donate a Loo, the other project in which New Dawn is involved for which the process of applying for a global grant has started.

These two projects will have to find an overseas sponsor club and New Dawn would also have to contribute. As mentioned, Karlien and Gavin for Copessa and Helene and Adele at Donate a Loo will be involved with President Ian in identifying the specific projects, the overseas contributors and the writing of the final proposal.

Time will be set aside, probably during the second club meeting in October, for members to join in the discussion.

Dates to Diarise: This Saturday and the following one we'll be selling raffle tickets for the Golf Day at the Spar in Parkview. Contact Linda Vink (082 782 4628) if you want to volunteer to help.

The meeting next week will be a morning meeting and not an evening one as originally planned. The speaker will be Hillary Biller, food editor at the Star, talking about heritage food.

The meeting the week after (29 September) marks the DG visit to New Dawn.

There'll be a club assembly at Twickenham Guest House in Auckland Park on Saturday, 2nd October.

The New Dawn Golf Day, in aid of Donate a Loo, is on Friday, 15 October at the Wanderers Golf Club.

A Thought for the Week: The purpose of life is to live, and to live means to be aware, joyously, drunkenly, serenely, divinely aware. - Henry Miller (1891 - 1980)