If you think South African heritage food consists of bobotie, boerewors and malva pudding, you need to broaden your horizons, Hillary Biller, food editor of the Sunday Times, told the meeting this week.

The newspaper's Lifestyle section featured South African chefs this past weekend who each spoke about their favourite South African dish and their choices are very different from the above three examples.

Hillary told the club than until fairly recently traditional African food had never been properly documented and there have been very few cookbooks that reflect these recipes. This is all changing. 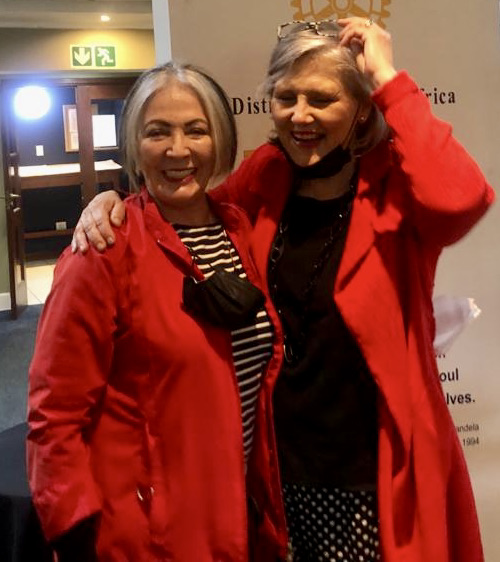 Old friends ... Helene Bramwell introduced Hillary Biller at the meeting
The popular foodie Zola Nene, originally from KwaZulu-Natal-Natal, featured lamb chops in her dish of lamb chops (very traditional South African fare) with isigwamba (mealie meal with spinach) and chakalaka.
Anel Potgieter, food editor at Rapport, is a Vrystaatse meisie who loves melktert (who doesn't!) She chose curried tripe and trotters as her heritage dish of choice and the photograph features on the front page of the Lifestyle section. It's not for the faint-hearted.
Mopani worms from Venda are also not and obvious choice for many diners, although those who've tried these easy snacks swear by them. They feature in the dish created by chef Lufuno Sinthumule of mopani worms wrapped in sweet potato strips and served with an avocado dip. Avos are of course plentiful in the northern provinces. 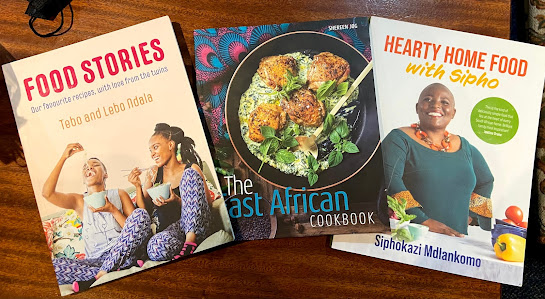 New recipe books reflect the changes in mainstream South African and African cuisine
Carrying on with the theme of a rainbow cuisine, Verushka Ramasami, a lecturer in tourism and hospitality, features samp and beans Durban style, which obviously means the addition of the spices traditionally used in curry dishes.
Mokgadi Itsweng, author of the book Veggilicious, features dikgobe sorghum grain, a heritage food, with cowpeas in her recipe, which she claims is the origin of samp and beans.
The celebrated chef, food historian and author Cass Abrahams, now retired, doesn't really like the term Cape Malay food and rather talks about African food infused with dishes from other countries. 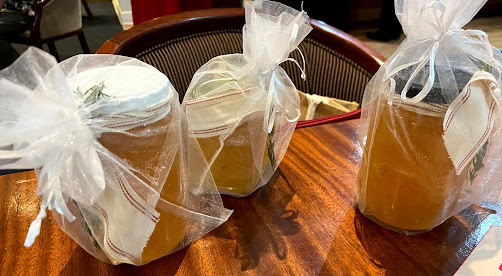 Delicious looking Rex Union marmalade
To round off her talk Hillary shared some interesting facts and trivia about a number of other typically South African foods like rooibos, Ouma rusks, Mrs Balls chutney, peppermint crisps and Durban bunny chow.
She also told how the South African Slow Food movement had been instrumental in saving the 50 or so remaining Rex Union orange trees in the vicinity of Hunter's Rest near Rustenburg and then held a draw for club members for three recipe books (pictured above) and three jars of her own home made Rex Union Marmalade, said by aficionados like Graham Donet, Ian Widdop and Adele Dabbs to be the best in the world. 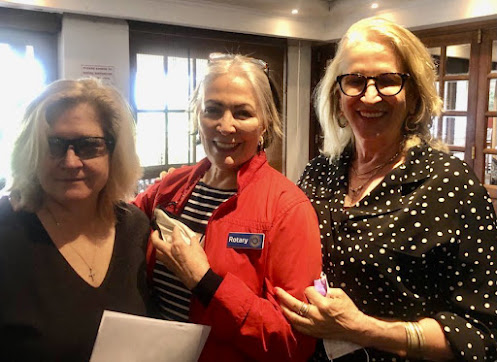 Sarah de La Pasture, Helene Bramwell and Adele Dabbs at the meeting
Carrying on with the theme of food, Brendon Martens said in an update on the seedling project that the Urban Agriculture Initiative has visited about a dozen urban farming projects proposed by Rotary and given advice on how to grow and water the seedlings being grown at the National School of Art site in Braamfontein.
Three of these sites have so far put in orders for seedlings, despite the fact that they are very well priced. About 15 000 seedlings are growing at the moment out of a capacity of 90 000, meaning that the uptake has been relatively slow. 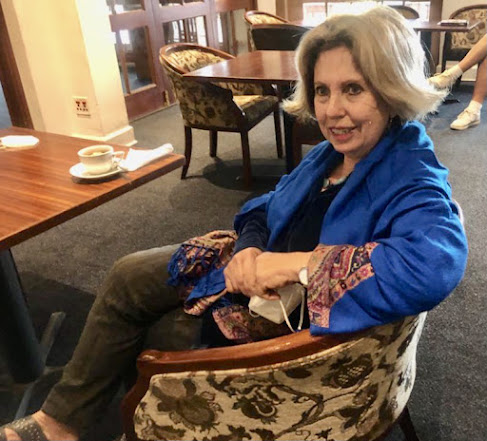 Lucille Blumberg at Parkview Golf Club
Lucille Blumberg reported that the country is now moving out of the third wave of the coronavirus pandemic, but that it is up to all of us to prevent a fourth wave, expected around December.  This will only happen if enough people get vaccinated before the traditional Christmas holiday gatherings and if people keep to  masking, sanitising and social distancing, she said.
She said that despite there being a plentiful supply of vaccines, the vaccination rate is still not high enough.
"We need to get the economy back and we need to get tourists back," she said. 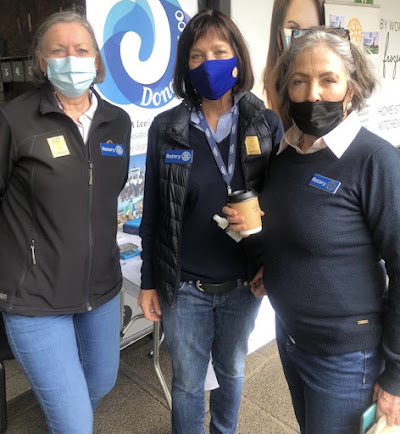 Joan Donet, Linda Vink and Helene Bramwell selling raffle tickets
Golf Day: The first session selling raffle tickets outside Parkview Spar last Saturday was a success, with Linda Vink and Joan Donet being joined from time to time by other club members, most notably Nola Ostle and her friend Grace, Amina Frense and Helene Bramwell, in selling more than R4 000 worth of tickets.
There'll be more ticket sales tomorrow and Saturday from 9 - 12am and volunteers are welcome to come and join in, even if it is just for a while.
Power of Pennies: The first draw, with a first prize of R5 000, which will help no end with your Christmas shopping, for this fun fundraiser will be held on Wednesday, 1 December. If you haven't joined yet, get moving by contacting Sarah se La Pasture, who'll register you and explain how  you can pay your R100 a month.
Next Week: The speaker is Lael Bethlehem, who'll be speaking on the hydrogen economy, a global movement using hydrogen as a low-carbon energy source to eventually replace fossil fuels.
A Thought for the Week: If moderation is a crime, then indifference is a fault. - Jack Kerouac (1922 - 1969)
Posted by Mike Vink at 11:28