Spring in the New Dawn Step

Just when it seemed as if winter would never end, with snow on the mountains down south sending icy winds our way, Wednesday, 1 September  dawned as a true Spring day on the Highveld with the Rotary Club of Johannesburg New Dawn.

At 6.30 am Zoo Lake was already bathed in sunshine and became warmer as the fun Rotary morning with a tree planting, induction of 5 new members and an inspiring update on the work of The Link Trust progressed.

Tree planters galore at Zoo Lake. Those not wearing masks (like the guy on the right with the red bowtie) will have   to report to Professor Lucille Blumberg

Excellent coffee and a muffin and rusk (courtesy of Twickenham Guest House) was served from 6.30 am by a very chatty Craig Green of CupaJozi and his mobile coffee kiosk (071 676 3638) if you want to make use of his services).

Craig sold 44 cups of coffee giving him a cash injection of R1100 with the same amount for the New Dawn membership committee. 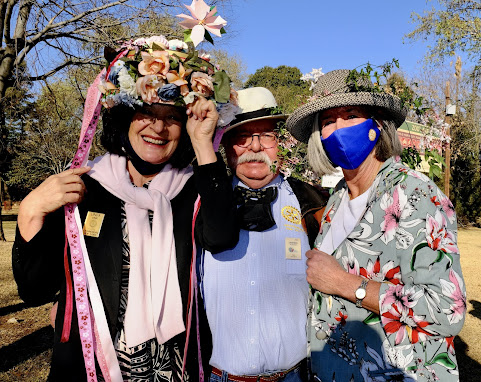 To add to the fun Fran Haslam, managing director of the Zoo Lake Users Committee, adjudicated a competition for the best bonnet (ladies) and bowtie (gentlemen).

Because there was no clear winner in the bowtie competition (they must have overlooked mine) the hamper prizes were awarded to Linda Vink and Helene Bramwell, both of whom re-donated their fabulous looking prizes (courtesy of Joan Sainsbury) to the Golf Day, now fast approaching on 15 October at the Wanderers Golf Club. 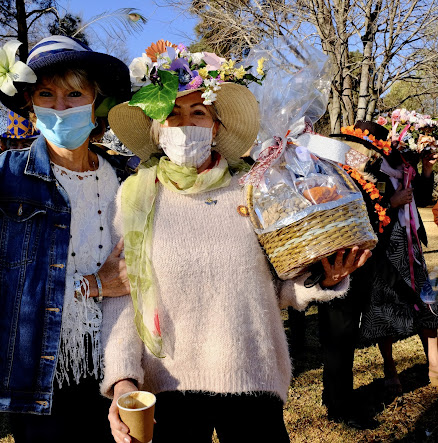 Fran Haslam with Helene Bramwell and her hamper 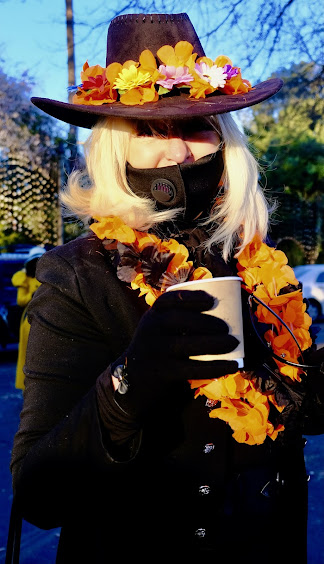 Fran was also in charge of the tree planting ceremony when an indigenous African Olive (Olienhout in Afrikaans) was planted  a little way uphill from the parking lot of the now defunct Moyo restaurant where it will provide shade and edible black olives.

Although the tree had already been planted the day before, members and guests, amongst them six girls from the National School of the Arts, helped to fill the hole with soil to make sure the tree is bedded down properly.

I've been describing the day in reverse, because it ended with the tree ceremony, preceded by the prize giving and group photograph (see above), which was preceded by the induction and Megan Maynard's talk. 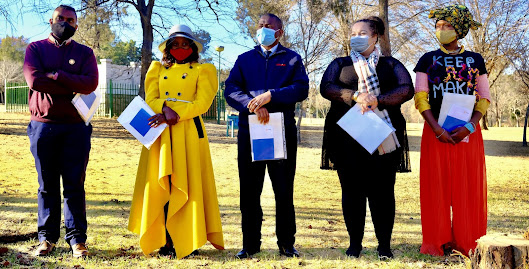 After being inducted by September President Graham Donet, the five briefly introduced themselves and received their badges and other Rotary paraphernalia.

It was certainly a day to remember and hopefully for them an induction that they'll always hold dear. 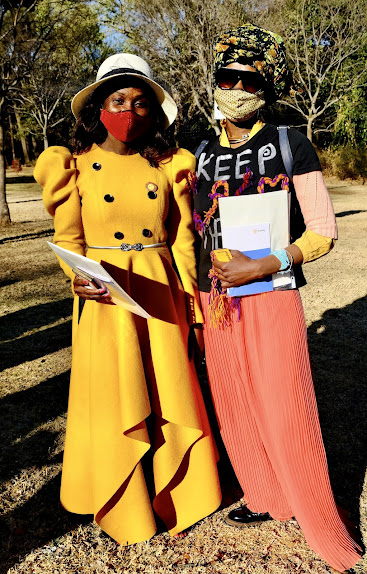 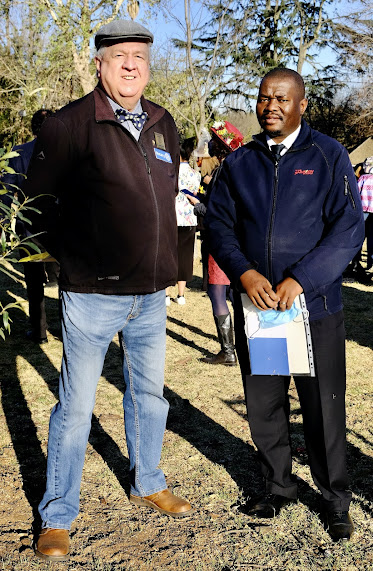 Before the inductions Megan Maynard gave an update on one of our signature projects, The Link Trust, which engages volunteers to teach literacy and numeracy to young primary school children who have fallen behind at an early age.

As in so many other spheres, Covid-19 has had a very negative effect on their work at the 19 schools where The Link had been engaged originally, Rotary, through New Dawn, was funding them to set up in new schools at a rate of three or four per year before Covid struck at the beginning of 2020. 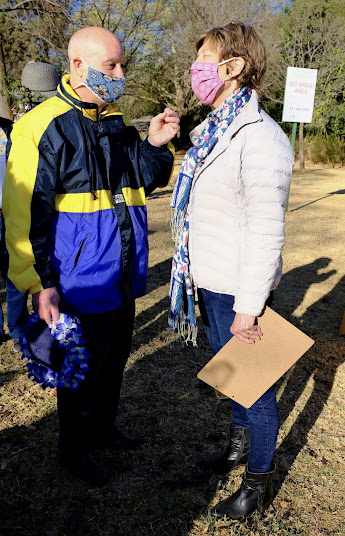 In the process The Link has lost quite a lot of their volunteers, either to the virus or because they're afraid to venture out too much, especially deep into townships, even when the schools have been operating.

Ever resourceful, The Link has responded by curating games that the children can take home and more recently engaged with the University of Johannesburg and the Alexander Education Committee to get student volunteers to visit the children. 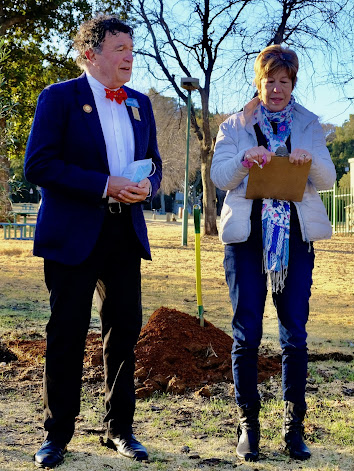 A positive development is that UJ has included practical teaching as a requirement for their third-year teaching students, which could potentially guarantee future crops of volunteers.

She said The Link has had enquiries from as far afield as Mpumalanga, KZN and Knysna to set up similar operations. Whichever way things go, they'd like to get volunteers to get back into classrooms for one-on-one teaching as soon as possible. 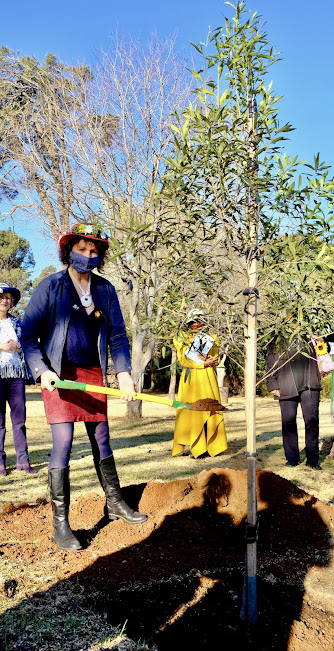 Well done to Babette Gallard for being so instrumental in organising such an auspicious Spring day, in typical Rotary style with more than just a touch of seriousness to go with the fellowship and fun. 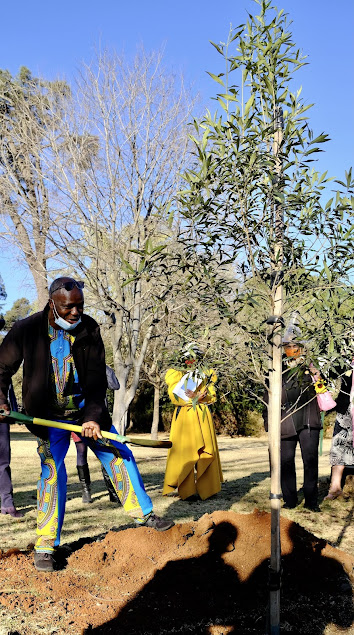 A very colourful Paul Kasango showing off his digging skills 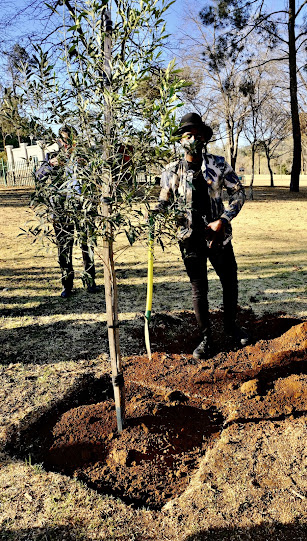 Matt Pitjeng taking a turn with the spade 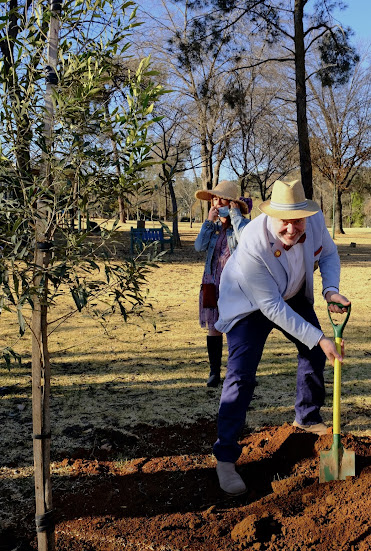 Many thanks also to Hannes Dressler for volunteering to be the official photographer for the day and for making his photos available online for everybody to see.

Next Week: We'll be having a hybrid meeting next week, online for those who can't or don't want to venture out and in person at the Parkview Golf Club for the first time in quite a while for the rest of the club.

The speaker will be Ronnie Kasrils in his guise of ex-minister of security services, speaking about the role of the security cluster in the recent widespread looting in KZN and Gauteng.