It was a week of looking forward and back, in the words of President Ian Widdop.

We started by looking forward; more specifically to the coming Rotary year. As we all know by now, Julian Nagy, the president-elect for the Rotary year 2021-2022, which starts on 1 July, is indisposed and will not be able to take the reins.

This has come almost at the last minute and after much discussion and approaching various members, nobody put their hand up emphatically to take over at such short notice. 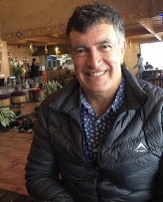 The Rotary Memorandum of Procedure stipulates that when there is an emergency in such cases, the sitting president, in this case Ian Widdop,  stays on.

Anyone who has been president will know that this is not a great scenario. The presidency takes a lot out of you and uses up a lot of your time. You normally look forward to stepping down; and that is true of "normal" years, let alone such an abnormal one as we've had.

To alleviate the burden, President Ian initiated a discussion at a special board meeting suggesting that a group of past presidents form a sort of council to help carry the load. Details haven't been thrashed out yet, but we can get a fair idea out of the statement he made at the meeting, which has now been circulated to all members. Read it and start thinking how you fit into this new world.

One of the plans is to ask other members to run meetings, not just the president. Start thinking how you can do this if you were to be asked. Study the format of meetings, who says what, to whom and when, then throw the role book out of the window and be creative and innovative.

This could make for a very exciting year!

The backward glance came from Don Lindsay, who told the club in a video link how he came to start a new club and why (https://1drv.ms/v/s!Au9rUCcjUDXRgXiQgwr_uPad-k3_?e=yAHVYM). You can copy and paste the link into your browser if it doesn't open directly. It's worth listening to if you weren't at the meeting.

Don is a consummate Rotarian who started off at the Morningside club before moving on to Henley on Klip, where he and Arthur lived at the time. When that didn't suit his travelling plans, he hit on the idea of starting his own breakfast club, mainly with people (Peter James-Smith and Graham Donet were two exceptions) who hadn't had any experience of Rotary before. 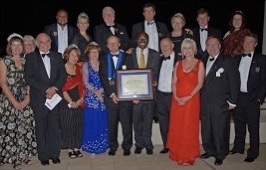 The club induction dinner. In those days the women wore tiaras to formal functions

The club started with 20 members (the minimum number required) of whom only 7 are still members; Lucille Blumberg, Graham Donet, Paul Kasango, Jankees Sligcher, Linda and Mike Vink and Ian Widdop.

Don also spoke about his Rotary experiences in Brazil and his life with Arthur Begley in that country ever since they left in 2013 after a decade or more in South Africa. 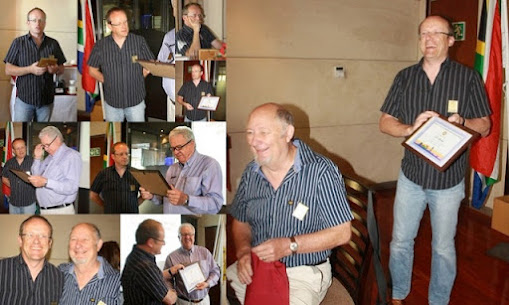 A collage from Don's farewell meeting in March 2013

That little glimpse into the New Dawn past should give newer members a better idea of the journey that we've undertaken over the past twelve years and how necessary it is to shake things up continuously to ward off the evil spirits of stagnation and boredom. 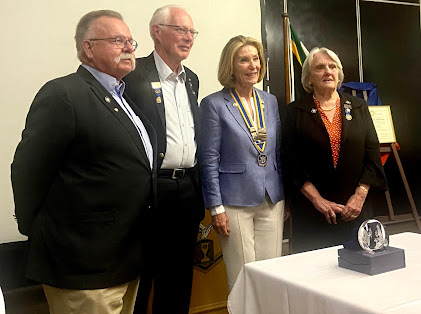 New Dawn has come a long way and occupies a senior place at district level thanks in no small part to Jankees and Judy Sligchers' tenure as District Governor and DGA. This was illustrated this past week when PDG Jankees was asked to officiate in the handing over of major donor level 2 (to the Rotary Foundation) status to PDG Francis and PDGA Janet Callard at the Northcliff Rotary Club. 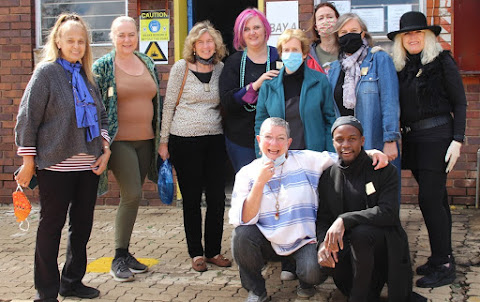 Also at the meeting Amina Frense, consummate journalist, TV producer, free press advocate and human rights activist of note, was given the opportunity to introduce herself to the newer members of the club to try to get members to know each other a bit better, a difficult task in Covid times.

Amina has retired from the SABC but is still active in the Institute for the Advancement of Journalism, the SA Press council (she's deputy chair) and the Editors' Forum, amongst other forums.

She's been doing a lot of work at the Humanitarian Centre on behalf of New Dawn and has already roped a number of other members in after the club nearly cut ties with the project a few years ago due to lack of interest.

Next week sees the induction of probably seven new members, a certain record for New Dawn, either at Fever Tree Lawn at The Wilds or on Zoom. At the time of writing the final decision had not yet been made.