Gearing Up for the Golf Day

And so, my fellow New Dawn Rotarians: ask not what your Golf Day can do for you - ask what you can do for your annual Golf Day.
Now that you've asked, there's a lot you can do (with apologies to John F. Kennedy and his speechwriter, Ted Sorenson, who wrote those famous words for JFK's inauguration speech as US President in 1961).
Why do we ask this? To quote Kennedy again: "To those people in the huts and villages across the globe struggling to break the bonds of mass misery we pledge our best efforts to help them help themselves ... because it is right."

Members of  the fundraising committee planning the Golf Day; Linda Vink, Carol Stier, Mike MacDonald, Helene Bramwell, Andy Ostle, who is helping Mike, Karlien Kruger, Adele Dabbs and Jankees Sligcher. Ian Widdop also joined us.
Money raised for the Golf Day will go a long way to help with club projects and allow us leverage to raise global grants. So get going today.
In no particular order: sell at least one sheet of raffle tickets. Each sheet has place for 15 names. At R50 a ticket, that brings in R750, or at 3 tickets for R100, it'll be R500. That's not too much to ask. The more raffle tickets we sell, the more of a success the Golf Day next Thursday will be.
If every member sells tickets (sell five sheets if you can, there's no limit, but even one will do) then we'll make up for not being able to sell on the street outside the Parkview Spar on Saturday mornings this year
Over the past few years the raffle for the now famous Barrow of Booze has netted R14930 (2015); R23850 (2016); R27640 (2017); R34560 (2018); and R35601 in 2019.
That's an upward curve and it would be great if we could keep that going this year, so sell to your friends, family and whoever's arm you can twist. There's a way to go, as we have R7200 to date.
Joan Donet emailed raffle sheets to members a while ago, so print it out and sell, sell, sell. If you don't have the sheet anymore, ask Joan or myself to resend it or make your own with space for a name, cellphone number and email address. Tickets are R50 for one and R100 for three. We can transfer that information to an official sheet later. 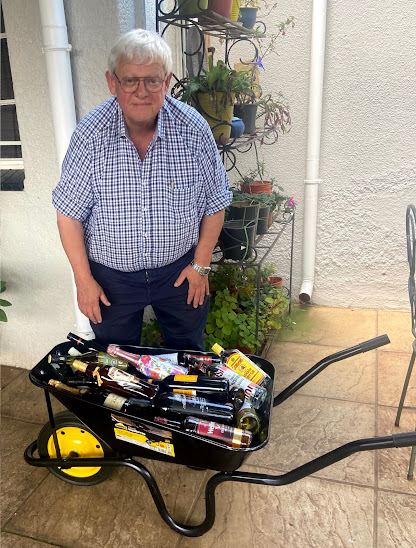 The Barrow of Booze is looking good, but needs some contributions
The Barrow of Booze is starting to fill up nicely but there is space for beer, whisky and good wine, so remember to bring with next week, or contact Linda Vink, who can arrange for a driver to pick it up.
Although we have some fabulous prizes for the winning four balls, there are still a few gaps and you can help there, too.
The top prizes are a golfing week for eight people at the Champagne Sports resort in the Drakensberg thanks to a generous  donation by the Sligchers, who are also sponsoring the Halfway House meal to the tune of R5000; four Johnny Walker Blue whisky thanks to Carol Stier and Paul Channon; four vouchers and beauty products from Helene Bramwell and The Mask; four hampers and butchery vouchers from Impala in Northcliff; and two cases  of prime wine from Hannes Dressler. There are also quite a few other, mostly individual prizes, such as a jazz microphone from Audrey Gatawa (come on all you wannabe singers) and a City Lodge voucher as well as Adele Dabbs's house in Plettenberg Bay for a week, which we may hold back for  now. Adele is also giving us four golf umbrellas. The idea is to have great prizes for the top six teams, so any help would be most welcome. 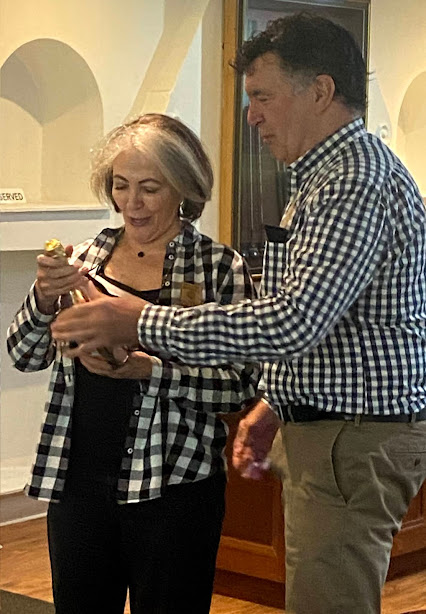 President Ian hands over a bottle of Prosecco to Helene to celebrate 50 years at The Mask
Helene, who has become one of the stalwarts of the club since joining, celebrated the 50th anniversary of The Mask this week, a milestone if ever there was.
Andy Ostle of the SA Golf Development Board is donating a floating trophy for the winning team and New Dawn will sponsor four smaller trophies for the players to take home.
Part of the funds raised for the Golf Day will go the the SAGDB (R15 000) to sponsor a youngster to attend the board's course. The rest of the proceeds go to our youth development programmes.
There is also a shortage of sponsorships for holes this year, no doubt due to Covid-19. If you know of anybody or work for or with anybody who is willing to sponsor a hole for R2000 (or less, we're very flexible) please contact Linda or Mike MacDonald. The idea is to have lots of activity out on the course to excite the players without distracting them.
Final arrangements will be made at the meeting next week, which will be devoted to the Golf Day the following day. Please arrive with your full raffle sheets on either day, or pay the money into the club bank account and email the sheet to Joan if you prefer to Zoom in.
At the meeting this week Lucille Blumberg said the Golf Day is being held at a perfect time as the second wave wains and before a possible third wave after the Easter festivities. Regarding the latter, Lucille said it's not the time to let your guard down and if people in general stick to the rules of masking, sanitising and distancing, the blow of a third wave can be softened. 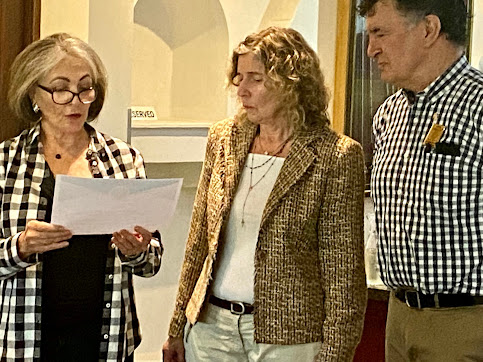 President Ian and Helene were also involved in the induction of Wendy Challis
Also at the meeting this week we had the induction of Wendy Challis as our latest member. Wendy was introduced to the club by Helene. She works in the tourist industry, one of the hardest hit by Covid-19 over the past year. Wendy said she does a lot of her tourism work in rural areas and has always been amazed by the resilience of people. There are lots of good news stories that never get reported, she said.
She suspects that once the country opens up again, there will be any more opportunities in the world of tourism.
Last week: My apologies for missing the blog deadline last week, but time and connectivity issues caught up with me. The speaker was President Bhaca of the Rotaract Club of Johannesburg, also founder and chairperson of the Buntu Development Foundation, which runs environmental and sustainable food production programmes.
President said one of their biggest challenges is the poor quality of soil in the township areas where they try to operate due to pollution or in areas close to garbage dumps and the like.
He struck a chord in the club now that sustainable urban gardening and growing has become a Coronavirus induced focus area, especially with members such as President Ian Widdop, Paul Kasango, Joan Sainsbury, Helene Bramwell and our very own eco-warrior, Llewellyn Leonard.
The club's contacts with the Urban Agricultural Initiative in establishing a second seedling operation at the National School of the Arts and growing expertise in areas such as hydroponics is sure to benefit the BDF. This is a prime example of Rotary at work, helping each other help the world. In JFK's immortal words, Ask not ...
And finally: Amina Frense announced that the Humanitarian Distribution Centre in Bedfordview will be open this Saturday for the first time in a year.
For those who don't know, New Dawn traditionally opens the Centre on the first Saturday of the month so that schools and institutions who can't go during the week, can go and fetch books and other items such as linen.
Because of Covid protocols, Amina said visits on Saturday are by appointment only, so contact her if you know of anybody who wishes to go.
A Thought for the Week: It is not what we do, but also what we do not do, for which we are accountable. - Molière (1622 - 1673)
Posted by Mike Vink at 14:55