A Walk On The Wilds Side

James Delaney's talk on The Wilds inspired Linda and me to go for a walk there this weekend and what a pleasant surprise it was.

As James promised, there were lots of people around to make you feel perfectly safe, but not that many that it seemed overcrowded.

My strongest impression was of the trees. There are not many places where you'll see that many different kinds of yellowwood, South Africa's national tree. There are also many white stinkwoods and the fever trees are quite something. There are hundreds of other tree species, to say nothing of the abundant bird life and many different indigenous plants.

Most of the trees were planted 80 and more years ago and are well established and the gardens look well kept by the 15 or so staff.

My, how tall you are! The giraffe statues stand at 5 metres

James's sculptures are dotted around the gardens (the kudu and other buck), up in the trees (the owls and bush babies) and on the lawns (the giraffes). The big giraffes, standing at 5m tall, are indeed a sight to behold.

James told the club how he had taken a tentative walk in The Wilds with his new dog, Pablo,  some seven years ago and kept going back to this marvellous 16 hectare stretch of indigenous forest smack in the middle of Houghton and bordering Killarney. 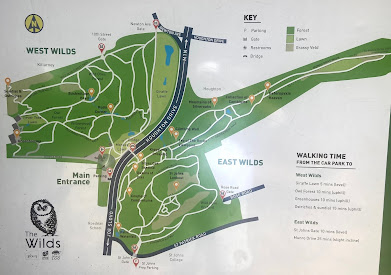 A map of The Wilds, split into East and West Wilds by Joe Solve Drive

The Wilds was established by Johannesburg Consolidated Investment Co when Houghton was laid out as a township. That particular piece of land, which is made up of two fairly steep koppies, was donated to the City of Johannesburg as a park because it was too difficult for JCI to develop it.

The Wilds was opened to the public in the 1930s and was a popular Johannesburg retreat. Before James first walked his dog there in about 2013, it had gained an unfortunate reputation as an unsafe space. It had become overgrown and neglected, although by then it had been fenced off to keep vagrants out. A baby giraffe in the woods

James told us how he first started clearing patches of garden which eventually became a passion of his. In recent years, with City Parks giving the space proper attention and the Friends of the Wilds helping with upkeep and soliciting donations, the Wilds have been restored to their former glory.

James keeps on adding his unique sculptures dotted around the park, which have now become synonymous with The Wilds. There are about 100 by now. 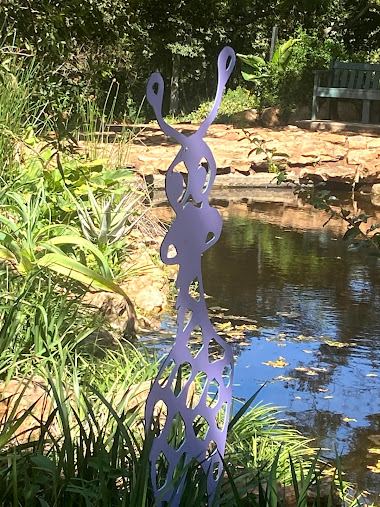 Bushwillow Pond is one of the few working water features

There are also artists working on mosaics at the four fountains, James said.

The latest addition to the park, the Garden of Yarns in the East Wilds, just across the Rodean foot bridge, adds a very colourful note and at the same time creates awareness of the scourge of gender based violence. It is a very colourful garden of plants and trees covered in crocheted wool along Joe Slovo Drive. 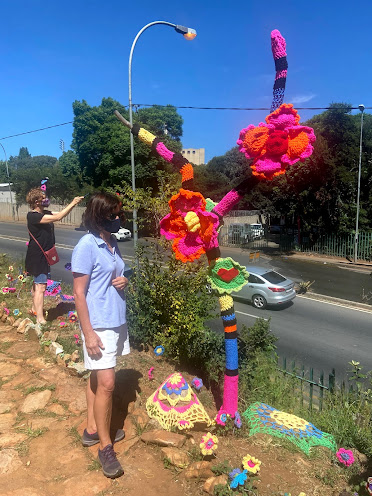 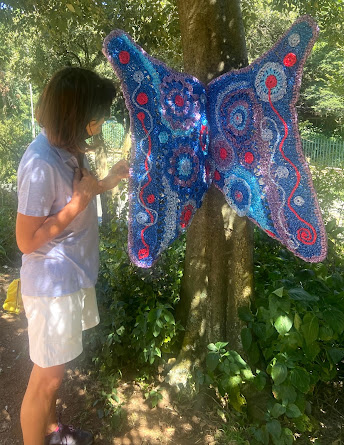 The pathways in the gardens, in essence a botanical garden, are clearly marked and there is a map at the entrance. Visitors have to sign in and have their temperature taken. Dogs are very definitely allowed.

Members can make donations by buying vouchers from CND Nurseries at 44 3rd Road in Lindbro Park.

A visit is a very rewarding experience and it's worth going back time and again to explore even more of the paths and climbs. 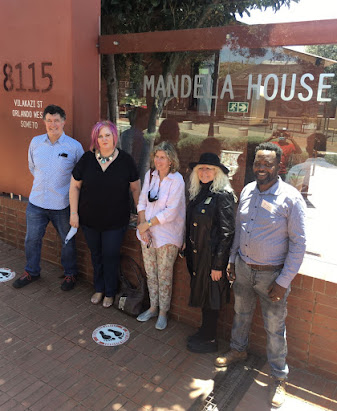 The New Dawn contingent with Principal Tshepo Ramutumbu at uMbuyisa

A delegation from New Dawn lead by President Ian Widdop visited the uMbiyiso School of Art in Vilakazi Street in Soweto yesterday, according to Joan Sainsbury one of only a handful of formal art schools in Soweto. Uniquely, they have between five and eight international exchange students attending regularly, Joan says. 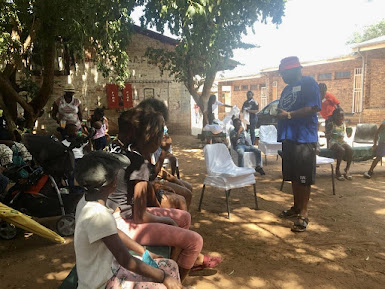 Mr Mako, the uMbuyisa gardening coach at the school

They attended a prize giving where the children were rewarded for the artworks and their gardening and then sang Happy Birthday to President Ian. One of the kids gave him a pair of Van Gogh socks as a gift.

Ian says Principal Tshepo Ramutumbu of the uMbuyisa School of Art could  be just the guy to lead Rotary's rebirth in Soweto.

Students at the school have started their own home grown vegetable gardens, Joan says.

Speaker: The speaker next week is Siphumeze President Bhaca, founder and chairperson of the Buntu Development Foundation. He'll be talking about the challenges of establishing community gardens. He's currently working in Riverlea and Langlaagte on such projects, which ties in nicely with what New Dawn is currently doing.

President says he's worked with our own Llewellyn Leonard on such projects.

And Finally: The board still needs to discuss the matter, but it looks very much as if we'll be able to start with hybrid meetings from March again, just in time to properly prepare for the Golf Day on Thursday, 11 March. Please remember to sell at least one sheet of raffle tickets to those with whom you have contact in these lockdown times.

Also, remember to bring a few bottles for the Barrow of Booze if you're coming to Parkview. If not and you cannot find a way to drop some off at Twickenham Guest House, or contact Linda or myself and we'll arrange for it to be fetched.

A Thought for the Week: What a strange machine man is! You fill him with bread, wine, fish, and radishes, and out come sighs, laughter, and dreams. - Nikos Kazantzakis (1883 - 1957)