It is not often that we induct four new members at once, but thanks to the efforts of Joan Sainsbury, we managed to do just that on Wednesday at our hybrid meeting.

Supported by President Ian, and in the presence of DG Annemarie Mostert (on Zoom), Joan Sainsbury read out the charge for four new members – Brenda Sakellarides, Cuthbert Gumbochuma, Jeni Lobel and Matt Pitjeng. 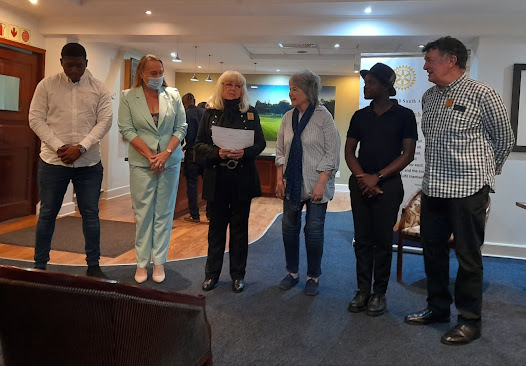 Cuthbert, Brenda, Joan, Jeni, Matt and Ian at the induction 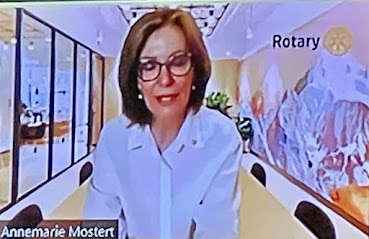 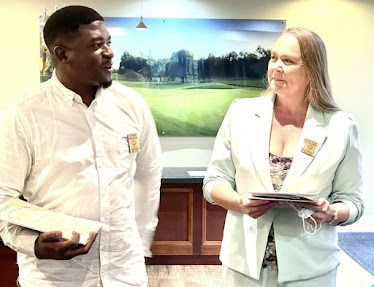 Cuthbert and Brenda after being inducted 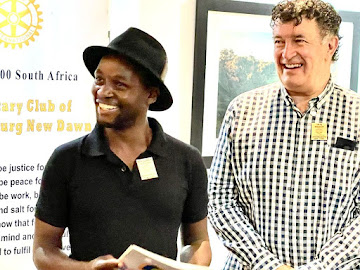 All four new members introduced themselves and were were handed their certificates, pins and other items including the Four-way test.

Carol Stier then introduced our guest speaker, Gabriel Krause, whose chosen subject was the life and times of WEB Du Bois. 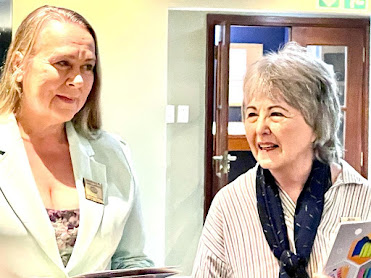 Gabriel, a graduate of Princeton, gave an illuminating look into the life of WEB Du Bois, who was born in 1868 and died in Ghana in 1963, aged 95. Du Bois was an American sociologist, socialist, historian, civil rights activist, Pan-Africanist, writer, author and Editor.  Du Bois studied at various universities, namely Risk, Harvard and Berlin.  At Harvard he was the first African American to earn a Doctorate.

Racism was the main target of Du Boise’s polemics, and he strongly protested lynching, Jim Crow laws and discrimination in education and employment.  His cause included people of color everywhere, particularly Africans and Asians in colonies.

Du Bois was a prolific author and popularized the use of the term color line.  Du Bois was one of the founding members of The National Association for the Advancement of Colored people, and edited the NAACP’s monthly magazine, “The Crisis”.

When he became editor in 1911, he joined The Socialist Party of America.  During the 1950’s, the US government anti-communist McCarthyism campaign targeted Du Bois because of his socialist leanings.  D. Kwame Nkrumah invited Du Bois to participate in the independence of Ghana.  It is rumored that he renounced his American citizenship at this time, but never actually did.  He died in the Capitol of Accra at the age of 95.

As discussed, Du Bois was a prolific author and fought for black rights around the world.

Gabriel’s talk generated much conversation in the club, and he responded to several questions before being thanked by President Ian.

Next week’s speaker is Grace van Zyl, President of Johannesburg Rotary Club.  She will talk about the plans for the celebration of their Centenary year.

The following week is a 5th Wednesday, and we plan to meet at 07h00 in the Wilds on the Fever Tree Lawn.

Professor Lucille Lucille Blumberg than gave an update on the Covid situation and said that there were early indications of an increase in cases which could herald the arrival of a Third Wave.