100 Years of Rotary in Africa

A visit by a Pennsylvanian in 1921 led to the founding of the first Rotary club in Johannesburg. It was also the first club in South Africa and on the African continent.
Grace van Zyl, President off the Rotary Club of Johannesburg, paid New Dawn a visit this week to tell us more about the history of her club, their plans for celebrating their centennial and how they aim to leave a legacy way beyond their first 100 years. 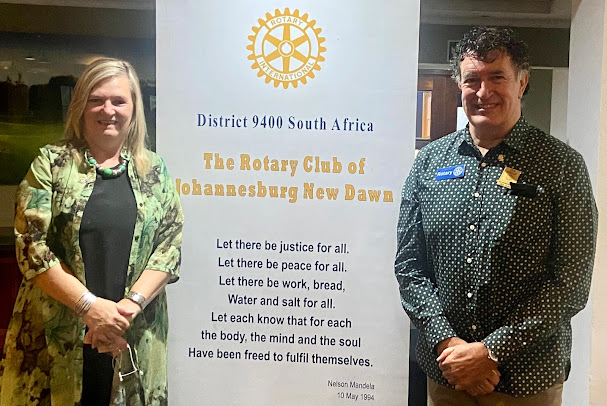 President Grace van Zyl with New Dawn President Ian Widdop after her talk
A few years ago RC Johannesburg was struggling to attract new members, as so many Rotary clubs all over the world do. During her term (this is her second) Gerace has managed to increase membership from a sluggish 17 members who were just waiting for the centennial celebrations to be over before disbanding the club, to a thriving and diverse 23, which reflects more women and more people of colour.
She told the club how Fisher, a member of the Rotary Club of Pittsburgh, had convened a meeting of five business men and other people at the Johannesburg YMCA in April 1921 to discuss Rotary.
The following week each one brought somebody else along and decided to start a Rotary Club. On 25 April 1921 a third meeting was held and 45 signatures were obtained for an application for membership. The club was chartered on 1 July 2021 as club no. 976.
This was barely 16 years after Paul Harris founded Rotary in Chicago in 1905. Many more clubs were chartered in Africa after that so that there are now 1485 clubs and 33 644 Rotarians across most of the continent.
The Johannesburg club started off by forming a choir to sing to patients at the then Johannesburg Hospital. As with Rotary worldwide, this soon translated into contributions to the hospital  and raising funds to do so.
The role of Rotary in Johannesburg was crucial during the 1922 Miners Strike and the civil war that ensued.
Looking to the future, the club wants to continue their bursary and scholarship project which over the years has paid over R25 million towards education for disadvantaged children.

A Peace Pipe letter to a club in Paris, and the reply of RC Johannesburg to their letter
The Johannesburg club was also the recipient in 1931 of one of the so-called Peace Pipe Letters from the Rotary Club of Keokuk in Iowa, USA, which fostered the role of Rotary clubs in promoting a peaceful world by smoking the proverbial Peace Pipe, as the letter states.
President Grace also spoke about her club becoming a Peacebuilder Club and her wish to encourage more clubs in the district to join the Rotarian Action Group for Peace, a suggestion that found fertile ground at New Dawn.
She said the centenary will be celebrated by occupying cyberspace at Discon in April and more formally in July, Covid permitting. 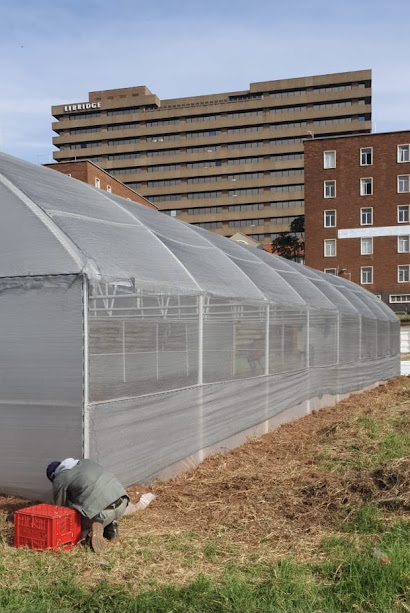 The new seedling tent at the NSA being readied for planting
President Ian Widdop reported that work on the seedling farm at the National School of the Arts in Braamfontein is progressing at a good pace and that the club would possibly be able to meet there later in April (Covid allowing) to take a closer look at the project.
The first seeds will be planted within the next two weeks and the first seedlings should be available for distribution by the end of April.
Lucille Blumberg gave her weekly summary of the Civid situation and warned of an impending third wave, especially following Easter Weekend festivities. She said the situation should be monitored carefully so as not to react too late to rising infections.
She also encouraged members to get the seasonal flu vaccination, which is now available and warned that it might run out before the end of the flu season. 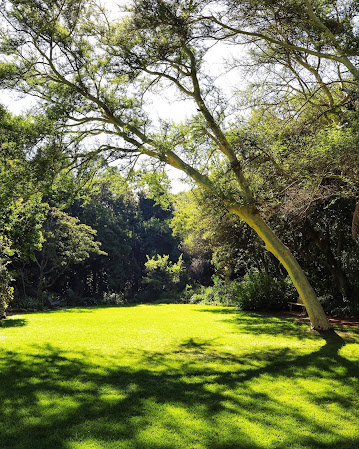 The tranquil Fever Tree Lawn at The Wilds
The meeting next week is  outdoors at The Wilds (bring your own chair, coffee and a roll), following which a decision will be made as to whether we should return to Zoom-only meetings for the next while.
Incidentally, President Grace boasted that RC Johannesburg had been instrumental in the founding of The Wilds, having had a JCI board member in their ranks who helped persuade the company to donate the land to the city to establish the botanical gardens.
The Wilds meeting will be used to induct a number of new members, adding to the recent New Dawn growth spurt. Once all the new inductions have been completed the club will number 46 members and growing (put that in your pipe and smoke it, RC Johannesburg!) the biggest and most diverse we've ever been.
A Thought for the Week: There is nothing like a dream to create the future. - Victor Hugo (1802 - 1885)