A list of 28 projects and activities in which members of the Rotary Club of Johannesburg New Dawn are involved, is a badge of honour for the club.

What potentially could be seen as a very daunting prospect, is actually just a reflection of all the things great and small that New Dawners tackle either collectively or in smaller groups down to individuals.

The great thing about New Dawn is that we still manage to have fun while doing it. 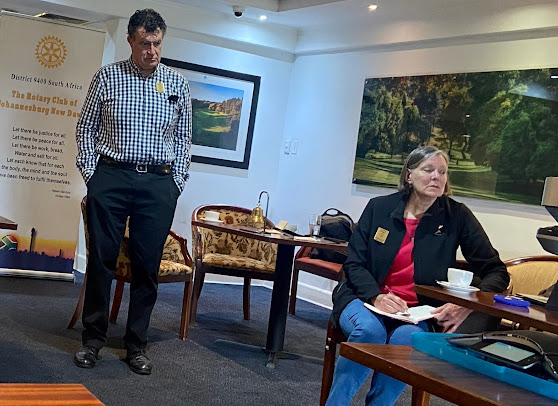 President Ian listening intently, with Joan Donet in front of the IT equipment, courtesy of Hannes Dressler and SAP,  that makes the hybrid meetings possible

Projects were the theme of the discussion at the meeting last week, led by President Ian Widdop.

The focus on projects, as is with fundraising, has to take into account the rather trying Covid-19 times we're living in.

President Ian said that because of Covid-19 and the various stages of lockdown, the club has no or very little money to spend on projects and very few prospects of raising funds in any significant way.

"We need to approach this in a different way," he said. 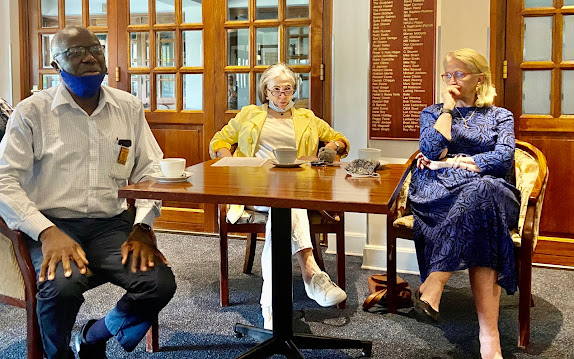 By his calculation, 24 of the 38 members are directly involved in the various projects, mostly with children  as the primary beneficiaries, and most others members indirectly.

He said that although the list might be seen as a sign that the club is a bit unfocused, we would be nowhere during the lockdown without all the diverse activity, not all which involve direct financial contributions by the club.

These smaller projects have kept New Dawn alive while larger projects like The Link have gone quiet due to the lockdown.

Covid-19 has brought the focus back on the Rotary motto of Service Above Self, he said.

Examples of the input of New Dawn members in projects that are making a difference are aplenty and one of the larger efforts that was highlighted at the meeting was the work that one of the more recent recruits to the club, Karlien Kruger, has been doing with Copessa, the Community-based Prevention and Empowerment Strategies in South Africa NGO led by Dr Nobs Mwanda. 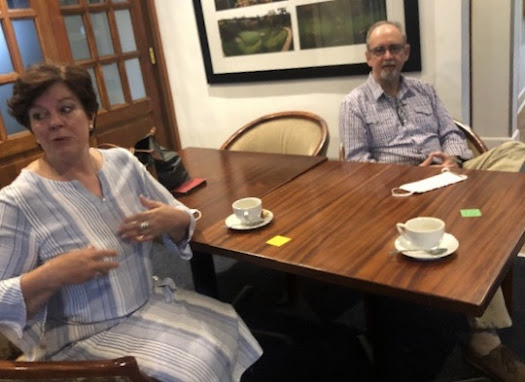 Dr. Nobs, as she is affectionately known, was a speaker at the club last year and grabbed everybody's attention when she shattered a glass with her fork to emphasise what child abuse does to a child's soul.

"That's what happens in Rotary, you get ambushed and shaken," President Ian said.

Karlien introduced a former work colleague, Gavin Atkins, who has been helping her sort out issues of corporate governance at Copessa and build a strategy to tackle all the projects they want to undertake such as starting up a community radio station, an App, a Gender Based Violence unit and efforts to combat violence against children. 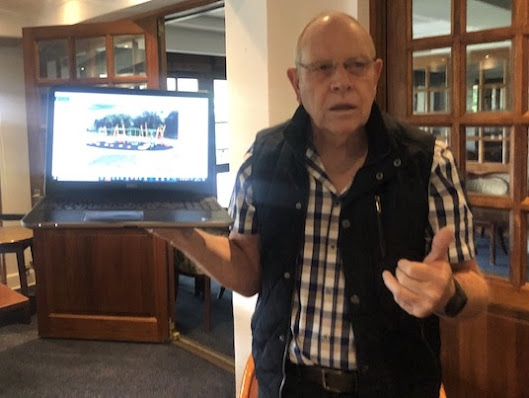 The marshal is back in town ... Dave Marshall holding up a screen photo of a possible Zoo Lake playground.             He also told the club he's seriously thinking of moving to Johannesburg

Another was the Zoo Lake playground, where Dave Marshall reported on ongoing efforts to put the district grant that was obtained earlier this year, to good use. This project needs to be signed off by the end of this Rotary financial year (30 June), but all involved seem to think that'll not be a problem.

At the meeting the club also congratulated Carin Holmes, who was promoted and is being transferred by the Salvation Army to Lusaka, Zambia, an exciting prospect for her and one which opens up possibilities for New Dawn as well.

Diarise: There was a board meeting on Zoom last evening so the meeting next week (11 November) will be a business meeting. New members (Sarah de la Pasture, Errol Burman and Ronnie Kasrils) are being asked to attend at the Parkview club,  where possible, next week so that badges and other induction paraphernalia can be handed over to them, as with the Paul Harris Fellowships announced at President Ian's induction in July.

The day before there is a major fundraising meeting at Twickenham Guest House (Tuesday (10 November) to discuss the possibilities of future fundraising events. All members are welcome and an invitation was sent out this week.

On Monday, 23 November there will be a special board meeting on Zoom to discuss the club leadership for the new Rotary year starting on 1 July 2021.

The invitation to the end-of-year Christmas meeting on Friday, 4 December will be going out soon.