A Festive Meeting as Covid Continues

Anything Zoom can do, a face-to-face can do better, or in these strange times, a hybrid meeting, but it was nevertheless refreshing to be able to do physical inductions and Paul Harris awards at the meeting last week.

Many other clubs have not yet started meeting in person, like the Rosebank club, and having the choice of a physical presence as well as online for those who so prefer, has been a great success, thanks mainly to Hannes Dressler and the IT team from SAP. 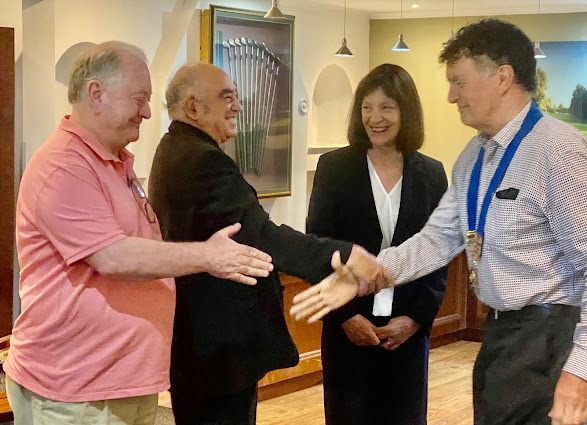 Hannes says he's working on a permanent solution for the club to this tough technological nut, something for which members are most grateful. It also makes us the envy of other clubs who haven't managed to sort hybrid meetings out yet.

The Wednesday morning meeting, where we were once more made very aware of the Covid-19 dangers, was followed by President Cyril Ramaphosa's latest address to the nation where he significantly lifted lockdown restrictions, most notably on overseas arrivals and visits and alcohol sales hours, but emphasised that a second coronavirus wave would only be averted if people stuck to wearing masks, kept up with social distancing and sanitised and/or thoroughly washed hands regularly. 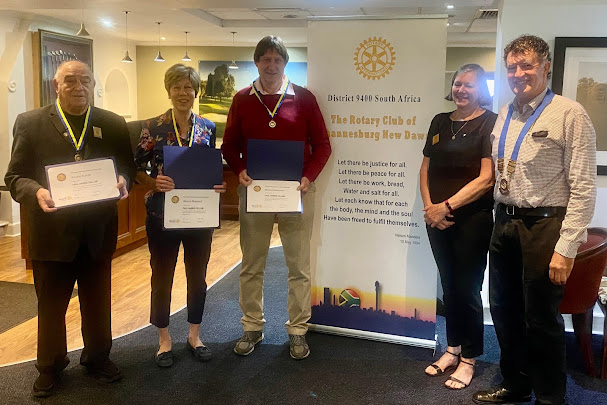 The meeting on Wednesday was a do-over of the handing over of the Paul Harris awards at President Ian Widdop's Zoom induction in July, the re-induction of PP Linda Vink and the induction of new members Christoph Plate and Sarah de La Pasture on Zoom during the lockdown and of Ronnie Kasrils and Errol Burman at the meeting.

Paul Harris Awards were handed over to Ronnie Kasrils, Joan Donet (sapphire), Mike MacDonald and Megan Maynard of The Link.

President Ian also announced that Carin Holmes has been made an honorary member of New Dawn, as she is embarking on a three-year stint for the Salvation Army in Lusaka, Zambia, a fantastic achievement for a beloved fellow member.

In his remarks after receiving his Paul Harris, Ronnie told how one of the Rotary founder's first acts in Chicago, was to supply public toilets to the community.

"I was reading, and for the first time something amazing hit me, one of his first acts to the public was something very dear to my heart, he built public toilets in Chicago. I'd like to brag a bit, because as minister of water affairs, for the first time we got the issue of sanitation moving in wonderful ways."

"We had Nelson Mandela doing the first public wash in which we were saying to the public whenever you have been to the toilet and always before eating, wash your hands. We taught this to the kids in schools."

"Alas and alack, we all know what followed in terms of the downward plunge into the sewers that some government people had left us. I would really like to, when we can rise up and be public again,  look into sanitation as a Rotarian." 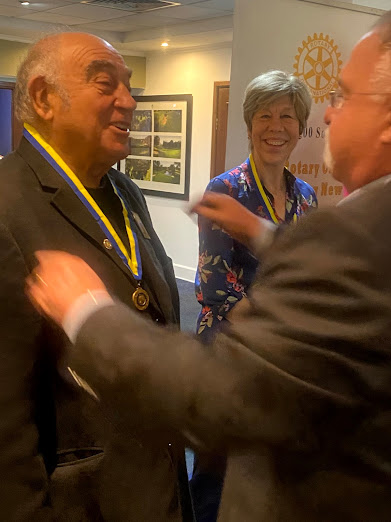 Joan Donet was awarded a Paul Harris sapphire (a second Paul Harris) for her work in keeping the administration of the club running smoothly and Mike MacDonald his for his charity work, not only for the annual New Dawn golf days, but also in the wider golfing world and for other charities.

The fundraising committee did a report back after a meeting on Tuesday evening where, at the prompting of Gavin Atkins, a project management expert who is about to join the club after being introduced by Karlien Kruger, a list of fundraising eight channels was itemised. These are all seen as complementary rather than mutually exclusive. 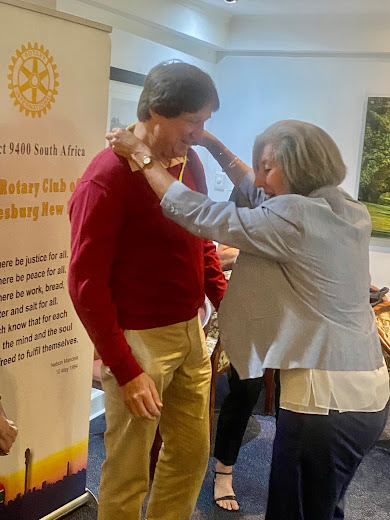 The channels include traditional activities such as the golf day, bridge drive and festive dinner; crowdfunding and other online fundraising; membership rewards such as the My School programme. fellowship activities that can raise funds on an ongoing basis; overseas funding through overseas clubs and Rotary International; corporate help through CSI programmes and sponsorships and others.

Several possible fundraising channels were discussed, amongst them three outlined by Joan Sainsbury through her contacts in the art world for possible art auctions and art sales, that sound very promising.

Covid warriors: Ronnie Kasrils told the club that his visit on Wednesday to receive his Paul Harris and be inducted as a member, was one of the few times he'd ventured out since the beginning of lockdown.

Lucille Blumberg said she was also leaving lockdown to attend the graduation ceremony where her alma mater, the University of  the Witwatersrand, is awarding her an honorary doctorate, just so that she can wear the traditional red academic gown!

Apart from Carin Holmes leaving for Lusaka, Christoph Plate said he was on his way to Tanzania for work, so didn't feel up to attending the meeting as an extra precaution against the virus.

Hannes will of course soon be on his way to the maternity ward with Katya for the birth of their second child, a son. He'll have to report on whether they'll actually allow him to be present at the birth. Strange times indeed.

Ian Widdop reported that he'd been invited by Nick Bell to speak to the Rotary Club of Holt and that he'd been guest speaker on Monday evening. His theme: A Creative Life. It sounds like something he can speak to our own club about.

Remember: Although gatherings of up to 250 people indoors and 500 outdoors are now allowed, the club has opted to do a Festive Picnic this year at the George Hay Park in Parkview instead of the usual dinner. It's on Friday, 4 December and starts at 4 pm. Invitations have gone out, so please pay up and start packing your picnic baskets.