The Dogs of the KNP Revealed

When PDG Jankees Sligcher was District governor, he managed to persuade Audi South Africa to help donate a Belgian Malinois (a type of Belgian sheepdog) to the K9 project of the Kruger National Park, where he held his District Conference in 2018.

The Belgian Malinois is one of the breed of dogs that are used in the KNP and other South African game parks to track poachers, as attack dogs and as sniffer dogs at the gates. Others include bloodhounds, a doberman/bloodhound cross and labradors and other breeds suitable for sniffing out contraband such as rhinoceros horn. 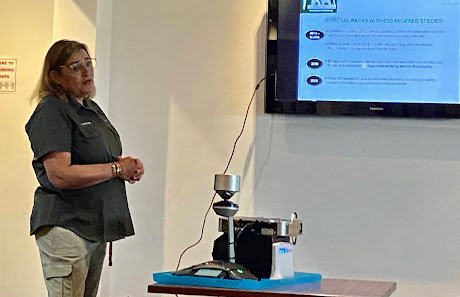 These and other interesting facts were shared with the club by Moira Shein, a member of SANParks Honorary Rangers.  She is  vice-chairperson of their Canine Project Watchdog which  gives support to the KNP by arranging donations of food and medical supplies for the dogs and their handlers and also training for the unit. She mentioned that dogs are fitted with a GPS unit as a tracking device and that these cost in the region of R25 000 each.

The Rotary dog was injured in the line of duty and is now being used to breed, hopefully including more dogs to keep the animals in the KNP safe.

The number of dogs used has grown from just three in 2012, to 46 currently, with a further 14 dogs used elsewhere, most notably to combat abalone poaching on the coast and to safeguard tourists on Table Mountain in Cape Town. 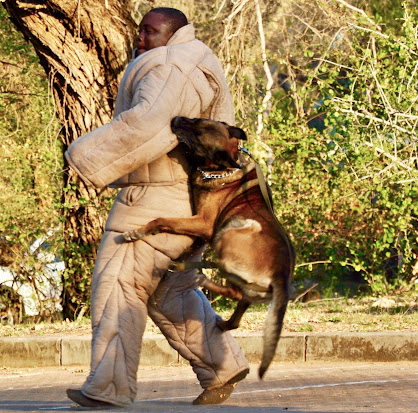 Moira told the club that the KNP is dealing with more than one poaching excursion into the park per day, which makes it very difficult and very expensive to safeguard the more than 2 million hectares area. Dogs and handlers often spend 10 days at a time in the bush in difficult and dangerous circumstances and provide companionship to one another.

She said amongst the biggest headaches are rhino poaching for their horns and pangolins for their scales, both used for a variety of products and potions in the Far East. Lions are also poached, as are tigers in the northern hemisphere, for their carcasses and bones.

A rhino horn, she said, fetches $65 000 per kilogram in the black market, making it more precious than gold or diamonds. 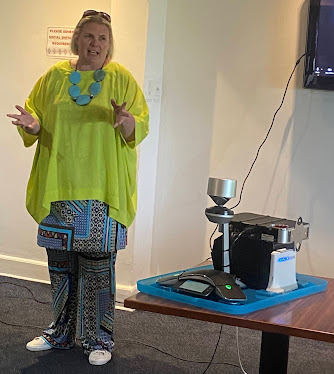 There were some very welcome visitors to the meeting as well, starting with Lauren Winchester, a lawyer by training who has worked extensively in public relations, advertising and media. Lauren decided on the unthinkable two years ago and moved her company offices to Soweto's famous Vilakazi Street to gain better insight into the way townships work and to help a township like Soweto to develop into a city in its own right.

The good news is that Lauren, who was introduced to the club by Jankees and Judy Sligcher, is keen to join New Dawn, bringing in much needed expertise and contact with Sowetans, which will help no end in our attempts to get Rotary better established there. 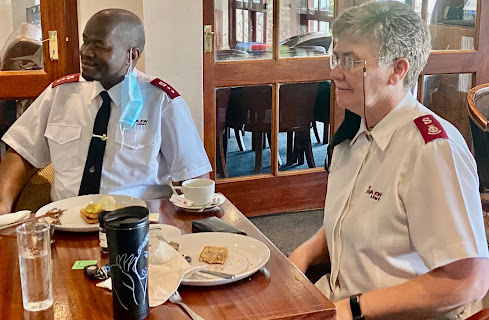 Velani Buthelezi with Carin Holmes, his predecessor at the Salvation Army

Another visitor was Velani Buthelezi, a captain in the Salvation Army, who is succeeding Carin Holmes as public relations chief for Southern Africa. Carin is, of course, leaving for Lusaka soon.

At the meeting President Ian Widdop presented her with a certificate of Honorary Membership of New Dawn, thus keeping the strong ties between Rotary and the Salvation Army that have existed since Carin joined the club in 2012. 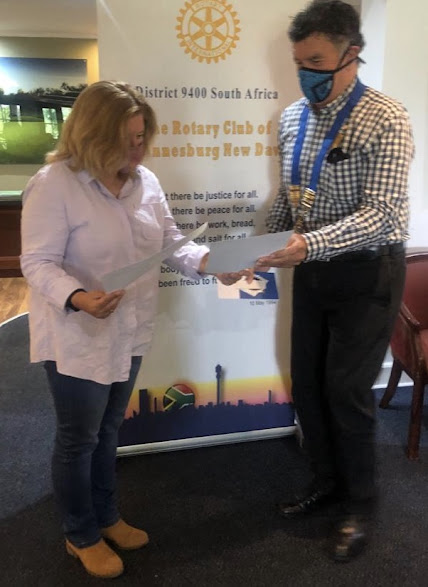 Velani told the club that he hails from Zululand and is family of Mangosuthu Buthelezi. He is very keen to follow in Carin's footsteps and join New Dawn.

Ian also handed her badge and certificates to Sarah de La Pasture, who attended one of her first face-to-face meetings since joining the club.

Paul Channon, Julian Nagy and Gavin Atkins at the meeting

Gavin Atkins was also a visitor and after the meeting  attended a fireside chat that Julian Nagy, Joan and Graham Donet and I had with him to tell him more about the workings of Rotary and to answer any questions he has.

Gavin has already submitted his CV, which will be discussed at the next board meeting and a recommendation made to the club as per the stipulated procedure. 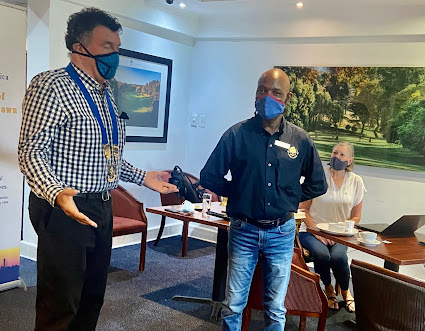 President Ian thanking Reckson Nkuna for his years of service

A last bit of ceremony at the meeting was handing over a wad of cash to Reckson Nkuna, who is retiring from the Parkview Golf Club where he has been looking after the New Dawn breakfast meetings ever since we moved there from the UJ School of Hospitality about five years ago. We managed to collect R1 500 for Reckson with extra donations during the brag.

Dates to Diarise: The speaker next week is President Ian Widdop, who will be speaking on the theme of A Creative Life, a talk he gave to the Rotary Club of Holt and District, the home club of Honorary Member Nick Bell, last week.

There's a special board meeting on Monday to discuss, amongst other things, the club succession plan after Tony Reddy withdrew his nomination for president for the Rotary Year 2021-2022 and the club's strategic plan.

The annual festive dinner gives way to a picnic at George Hay Park in Parkview on Friday, 4 December at 4 pm. The invitations have already gone out, so do invite as many of your friends and family to come along for a fun evening during which we can hopefully raise some much-needed funds for the club.

Precious few members have paid, so don't forget the joining fee of R150 per person (you're welcome to donate more) and don't forget to bring your own picnic basket with food and drinks and chairs and blankets. Please pay by EFT as taking cash doesn't sound like a good idea during the Covid crisis.