Having to read CS Lewis's The Lion, The Witch and The Wardrobe as an eight-year-old because the teacher was too busy to continue with the book, gave her a lifelong love of the spoken word, admitted the radio presenter, actress, director and singer Shireen Hollier, our speaker at the meeting this week.

Shireen presented the Afternoon Drive show on Classic 1027 until the radio station was summarily closed down in June of this year, leaving a gaping hole in the lives of lovers of classical music. 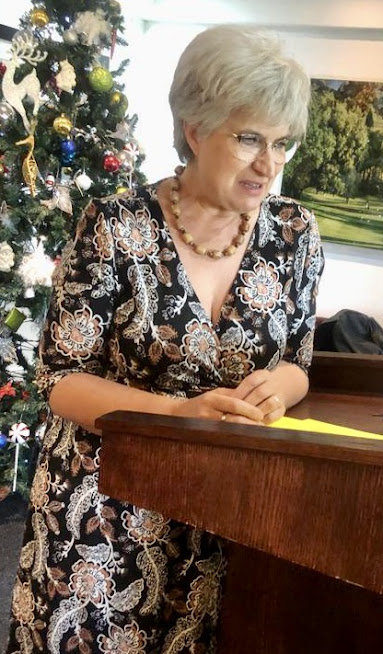 Shireen told how she'd joined Classic 1027 about three years ago to become part of a settled and very knowledgeable team of presenters. Although she had been steeped in music of all kinds from an early age, she said, she still had to learn to pronounce the likes of Joaquim Rodriguez's Fantasia Para Un Gentilhombre with a proper Spanish lisp. Not an obviously easy task, no doubt. 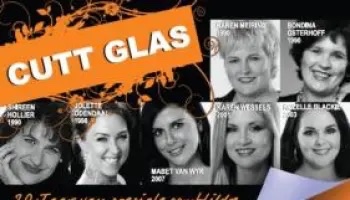 Shireen was a founding member of the a cappella group Cutt Glas, but as the only one who was married and had a child,  touring, as they did incessantly all over the country, became impossible for her and she left. The ensemble still exists.

Working alongside people like Maestro Richard Cock has its challenges and to differentiate herself, she turned an old love of trivia into a broadcasting "hook".

To illustrate this, she said Wednesday is the 24th of November; there are 24 hours in a day; 24 carats in gold; 24 letters in the ancient and modern Greek alphabet; 24 spikes on a backgammon board; and an object with 24 sides is called an icositetragon or 24-sided polygon. Furthermore avocados, rice and coffee all have 24 pairs of chromosomes.

And speaking of coffee: Johann Sebastian Bach was a coffee lover who drank 8 very strong cups of coffee a day, as was Beethoven, who counted out 16 coffee beans for every cup he drank.

And as for the contention of the new "owner" of the 1027 radio frequency that classical music is dead or dying, she pointed to a concert in Boston, USA in 1872 conducted by Johann Strauss which featured 2000 musicians, 20000 choristers, 200 conductors and an audience of 100000. 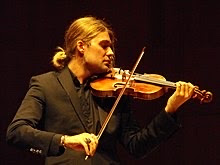 The crossover violinist David Garrett and the Croatian duo Two Cellos sell in the hundreds of thousands and pack in audiences all over the world, she said.

The realisation that the station was in financial trouble hit soon after she joined three years ago, and then Covid came to give the final push into eventual oblivion.

Shireen ended her talk by playing the beautiful Abendlied by Joseph Rheinberger, as performed by the Drakensberg Boys' Choir to emphasise that no matter what, classical music will never die; nor will it ever fade away. 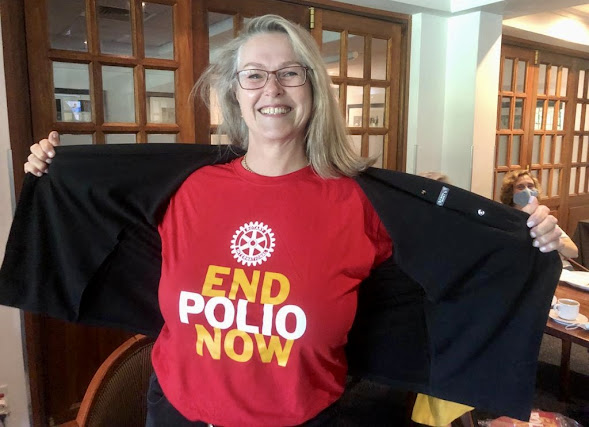 And in other news ... Lucille Blumberg started the meeting off with a Covid update, saying the latest increase started off in Pretoria at the Tshwane University of Technology and that the extent and severity of the fourth wave that is now upon us, is still an unknown factor. She also advised people to get vaccinated now, rather than at the height of the new wave.

Prior to the subsequent announcement of a new variation fuelling the fourth wave, she said people can go ahead with their Christmas plans, but must keep wearing masks and following all the Covid protocols strictly.

Carol Stier showed off her End Polio Now t-shirt that she got from the Rotary shop. R10 from every sale of a t-shirt goes directly to Rotary's End Polio Now campaign. The t-shirts are a great branding instrument for Rotary.

Breakfast: The club was contacted by the Parkview Golf Club management last week after only two people of those present ordered breakfast the previous week. Parkview have waived a venue fee and put up with quite a bit of Rotary intrusion and shenanigans over the years because serving breakfast has been worth their while. It has been worth it for them to bring in staff early to get the kitchen going for us on Wednesday mornings, but clearly not so if only two people order it.

We managed to get quite a few more orders in this week, but it isn't really an incentive for Parkview  anymore unless things change quite drastically.

This coming Wednesday is the last formal meeting of the year and it would be great if as many members as possible join us there and have a great breakfast at the same time. After all, it was the quality of the breakfasts and the reasonable prices that drew us there in the first place.

It doesn't make things easier for New Dawn fellowship if we're faced by a screen full of blank boxes or photographs of members tuning in on Zoom. As much as hybrid meetings work in some regards, they don't in others and whether in person or on Zoom, Rotary only works with proper participation and two-way communication (see the Shaw quote below).

Only three of the seventeen boxes on Zoom last week were actually active, the others faceless or with a photograph so that there is no way to know if someone is listening, has gone to make tea, is feeding the dog or children, or has gone for an early-morning swim.

Above is a graphic presented to the Rotary International conference by Dr Michael Angelo Caruso last year that sums up basic Zoom etiquette. These are handy tips. Please take them to heart.

Christmas picnic: Please pay your R100 entrance fee into the club account (FNB 62217422609) and start looking out for pink elephant gifts to wrap and put under the tree, start planning your picnic hamper and deciding which guests to invite, we want to make 8 December a jolly send-off for the sometimes un-jolly year 2021.

A Thought for the Week: The single biggest problem with communication is the illusion that it has taken place. - George Bernard Shaw (1856 - 1950)