A Visit to the Seedling Farm

Braving the Wednesday morning cold for a Rotary meeting is not for the faint hearted, but then Rotarians are made of sterner stuff. And guess what? It wasn't all that cold and I'm sure everybody there will agree it was worth it.

The venue was of course SF2 at the NSA with the UAI.

For those who haven't been following what's going on at New Dawn, that translates into Seedling Farm 2 on the grounds of the National School of the Arts in Braamfontein, undertaken by the Urban Agriculture Initiative and funded by Rotary, through a Rotary Foundation emergency Covid grant. 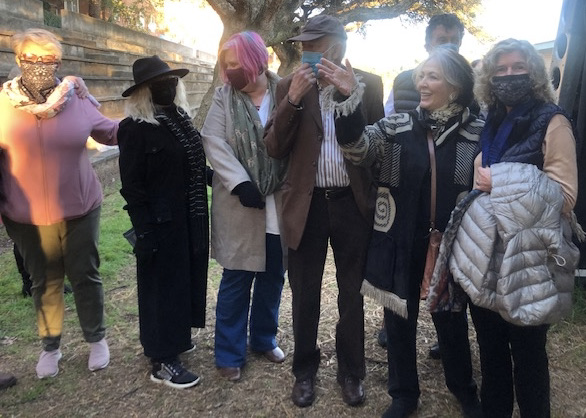 The meeting started at the new outdoor auditorium that the NSA erected to be able to do Covid-safe concerts and performances. We were greeted by two pupils and a guitar and a lively song.

We were also greeted by the theatre cat, who apparently made himself at home around the new stage as soon as it was erected. Theatre people know a theatre cat brings good luck and sellout performances. Echoes of Gus the Theatre Cat, no doubt. 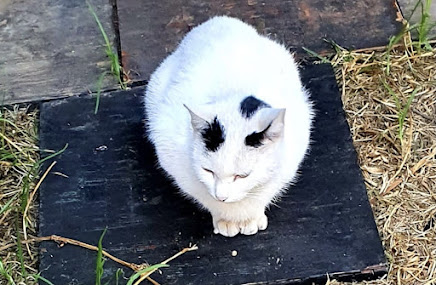 The NSA cat basking in the sun, unperturbed by the presence of Duffy, the Widdop's dog 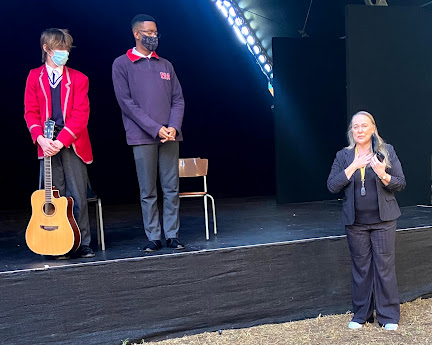 Brenda Sakellarides, one of our newer members and a teacher at the NSA, said that the Interact club at the NSA had recently been rejuvenated by a group of eager pupils and that they are very excited to be able to work with New Dawn, a great fit because of the seedling farm on their premises.

The NSA has been through a tough time during the lockdowns starting in March last year, but it is clear their response hasn't been to sit and complain about the hardships, rather to get up and do something about it. 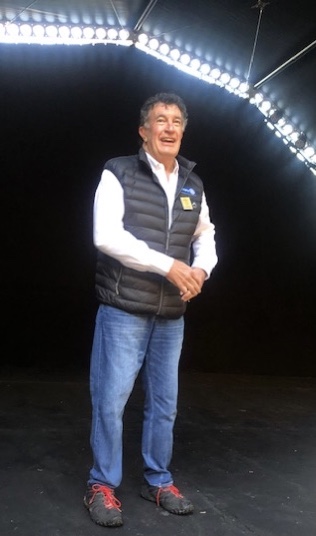 A surprise act was when President Ian Widdop mounted the stage for a stirring rendition of a piece for baritone from Fauré's Requiem, which was going to be the work at the Concert from Scratch that New Dawn was planning on doing with Richard and Sue Cock as a fundraiser before lockdown struck in March last year (remember those days).

Ian sang in lieu of grace and freely translated the words as the stirring: 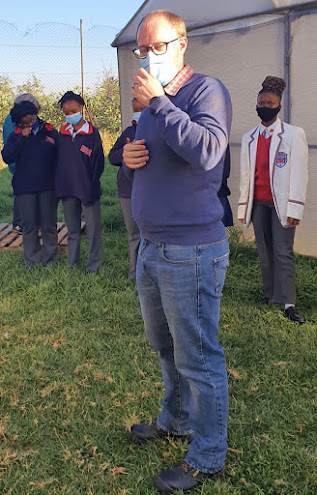 Brendon Martens of the UAI

The day of course really belonged to Brendon Martens of the UAI, who took the group of some 20 members and half a dozen visitors (not counting the Interacters and the NSA performing duo) on a guided tour of the two seedling tents tucked away on a small patch of one of the sports fields.

Brendon explained that it is planting and harvesting time for the seedlings, a busy time of the year for them. Seedling Farm 2 has now been paid off in full and the first seedlings should be there once production plans for the various sites that New Dawn members have identified, have been drawn up under the auspices of the UAI team.

He repeated his previous message that it is very important for them to know what the exact grow space in square metres is, and what the position is with water supply. He said about 25 sq. m. is a viable starting point for a garden. As soon as all that information is available, a date will be set to begin planting the seeds. 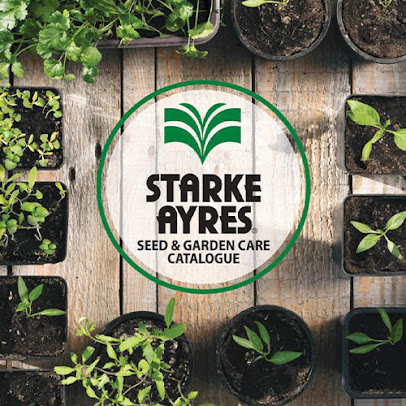 He also announced that the seed company Stark-Ayres had agreed to sponsor the seeds to be grown at SF2 to the tune of more than a kilogram of seeds for every variety planted, a very generous offer indeed. That's a large amount of seeds.

He said the UAI deems it important to plant crops that yield a high nutritional content. Donating bags of mielie meal for example, provides a short term solution in terms of their calorific value, but people need proper nutrition. 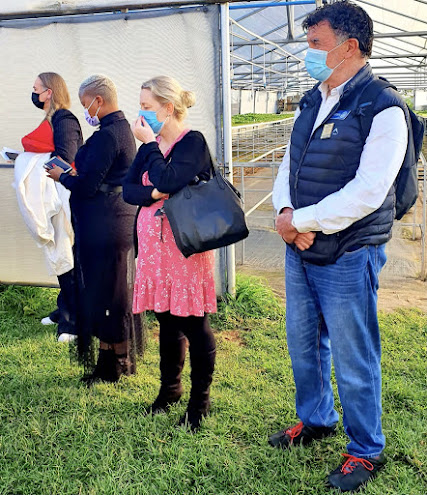 President Ian Widdop at the seedling tent. Next to him is Danny Geddes

Brendon is set to join New Dawn, as is Danny Geddes, a former member of the Rotary Club of Claremont in Cape Town and soon to be project manager for the UAI. Let's all hold thumbs.

The UAI is very excited by the initiative to train ten young people in the Vicoria Yards/Makers Valley scheme who can then help local gardeners with technical advice on what to plant, where to plant and to keep them motivated to carry on planting, Brendon told the club. If it works, this will be rolled out to other areas.

He also said supermarkets such as Checkers, Woolworths and Spar have started buying crops such as spring onions and celery from them.

The NSA will be able to begin sourcing their own vegetables for the kitchens soon and he envisions an ever closer relationship with the school. 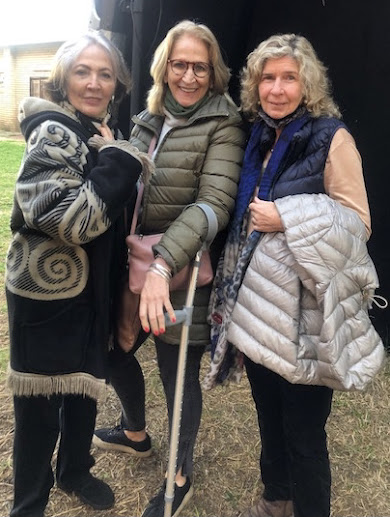 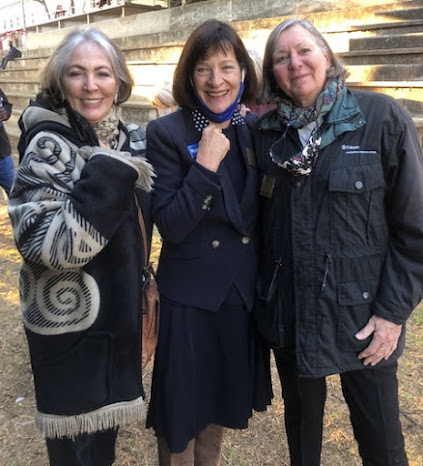 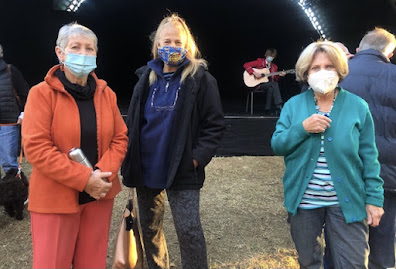 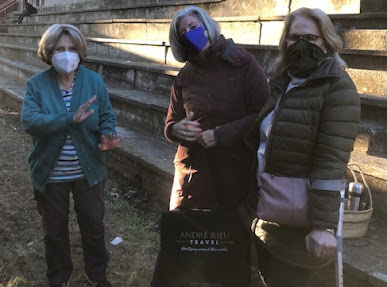 Lucille and Adele with Judy Sligcher 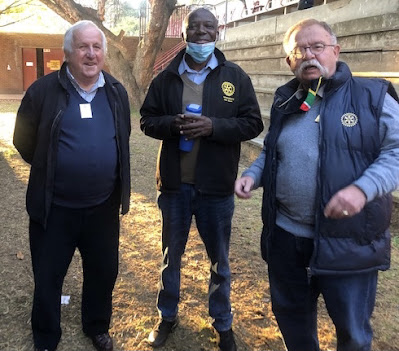 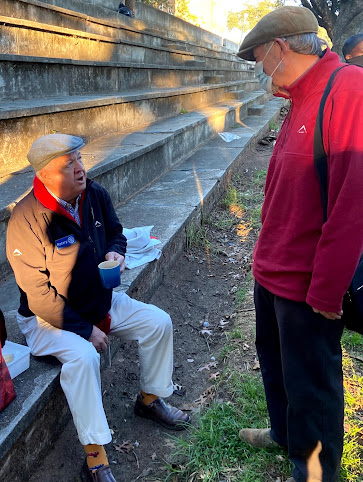 Our outgoing AG, Peter James-Smith, brought his successor, Richard Moloney of the Rotary Club of Rosebank, along for the site visit to introduce him to the members present. Richard will be assistant governor for a three-year term. The AG represents the District Governor for a number of clubs and basically helps to ensure compliance with Rotary International aims.

All in all it was a very successful visit and great to meet in person again. A decision on whether to batten down the hatches for a possible third wave of Covid infections or to attempt hybrid meetings again, is pending and will be announced soon.

A Thought for the Week: Man is so made that he can only find relaxation from one kind of labour by taking up another. - Anatole France (1844 - 1924)