No Rain On The New Dawn Picnic Parade

The rain stayed away and it was all systems go! on Friday afternoon for the New Dawn picnic and end-of-year social gathering at Marks Park Sports Club in Emmarentia.

This was a last-minute change last Thursday when it seemed that there would almost certainly be rain on Friday afternoon and evening. George Hay Park would not have afforded us any undercover facilities if the forecasters were right.

They weren't, but Marks Park, where we've been having our annual Festive Dinner over the past few years, came to the party and offered us their verandah, bar facilities and lawn free of charge. 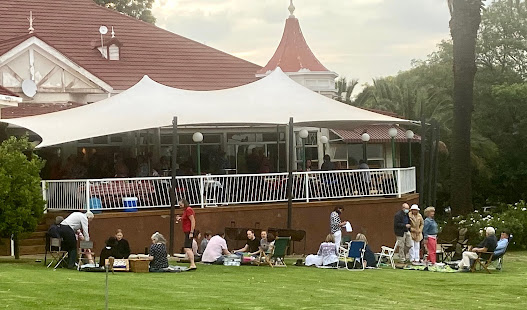 Picnic in the park. The scene from the lawn, looking towards the main building at Marks Park

We managed to raise R20 000, not bad in a year where significant fundraising has proved almost impossible. This is thanks to some generous donations, even from members who could not make it for various reasons.

The money goes to the Donate-a-Loo's toilet installation at the Reamogetswe Crèche in Diepsloot.

Some of the WhatsApp messages after the picnic

The evening was rated a success by everyone and by the time we left shortly after nightfall, the rain had still stayed away. Marks Park will definitely see us again. We numbered almost 40 people including guests and, I'm afraid to say those of you who couldn't make it missed out on a very pleasant and relaxing evening.

Richard Jones, our minstrel from the Christmas Dinner last year, was in his element and played songs that all of us recognise. Richard complained about the acoustics in the bowling club hall last year, but had no problem making himself heard this year and added immensely to the relaxed atmosphere. 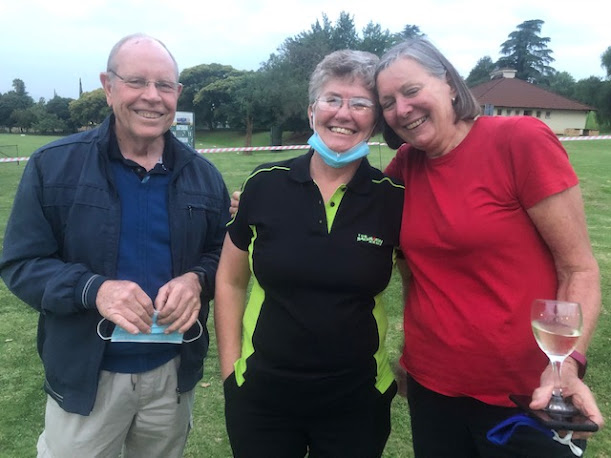 Carin Holmes came to greet before leaving for Lusaka. Here she is with Dave Marshall and Joan Donet

As has become a habit of New Dawn, a number of guests had their arm twisted to take time over the summer break to think about joining the club. 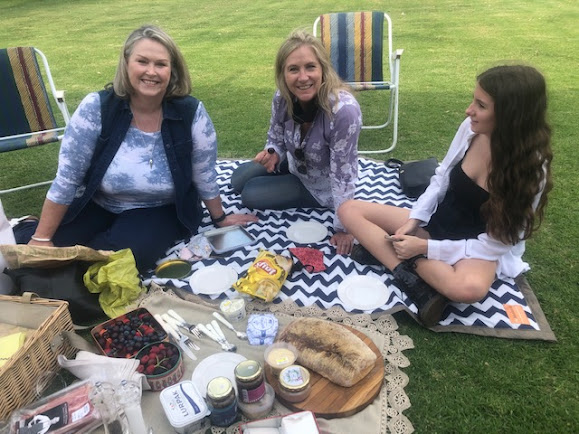 If there had been a competition for the best picnic basket, Carol Stier would've won hands down. She
shared it with Melanie Walker and Shannon Ludbrook 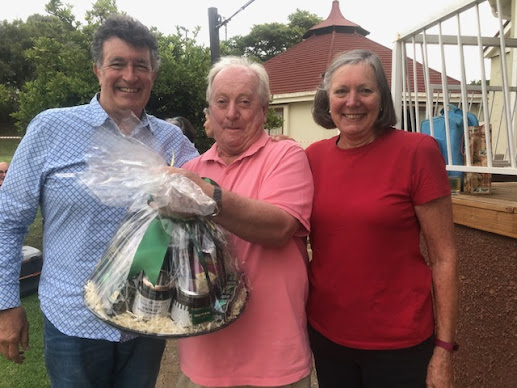 The raffle prize was won by Errol Burman. Here he is with President Ian Widdop and Joan Donet

The raffle, for the hamper donated by Carol and Linda Vink, and for which most tickets were sold on the day, netted R3600, not bad for these difficult times. The Thrupps hamper proved to be a popular drawcard and we even managed to get some of the bar regulars to have a try at winning it. Errol Burman ended up with the right number. 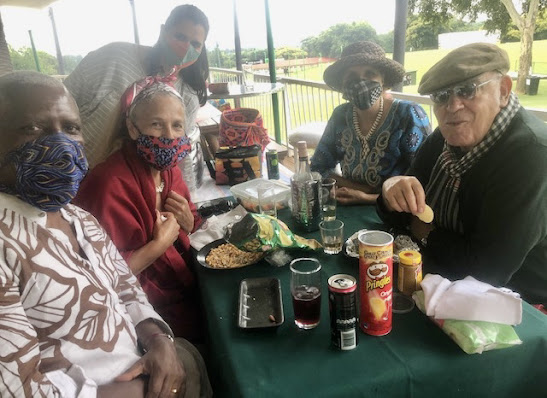 Ronnie Kasrils, Amina Frense and their guests, Faith Isiakpere, Shaaista Bulbulia and her mother, Firdoze,
chose to sit at a table on the verandah

One of the plus points of the venue was that you felt part of the same group whether you sat on the lawn or stayed at one of the tables on the verandah. Amina Frense, new member Ronnie Kasrils and their guests, the movie personality Firdoze Bulbulia, Shaaista Bulbulia and Faith Isiakpere, were amongst those who stayed upstairs. 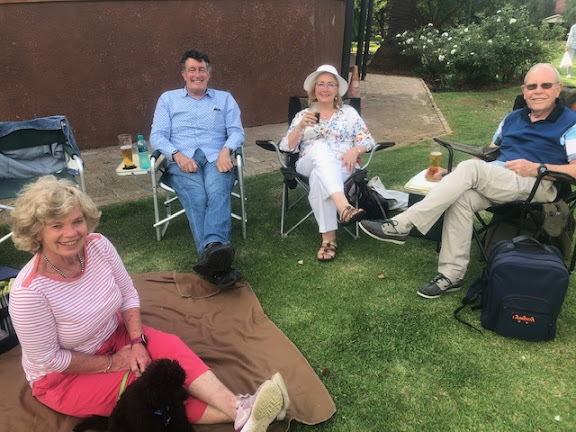 Firdoze is one of those who will be spending the holiday deciding whether to join New Dawn, as were the Nagy guests Nick and Marnie Vujovic, who both stated that they are definitely in, as well as Wendy Challis, Helene's guest. 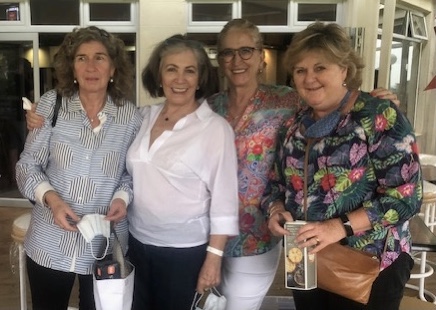 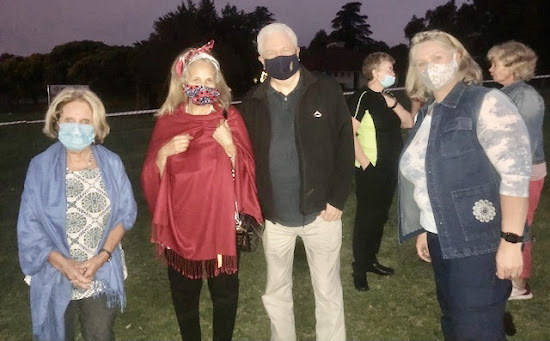 Lucille Blumberg made a cameo appearance. Here she is with Amina Frense, Graham Donet and Carol Stier
The picnic followed on from the meeting last week where Gavin Atkins was inducted into the club, keeping our numbers on 38 with Carin Holmes leaving as an active member.
At the meeting it was announced that Julian Nagy has agreed to make himself available as president for the Rotary year starting on 1 July 2021. 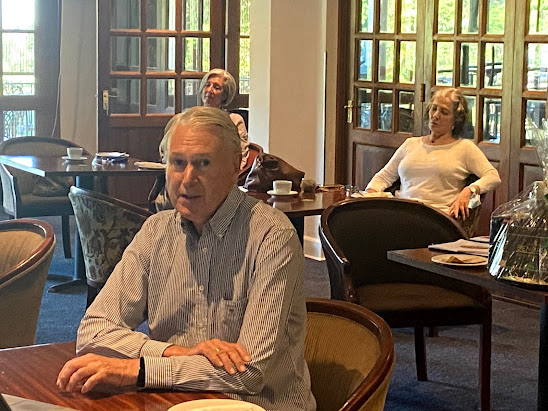 Julian Nagy announcing the names on his new-look board for 2021/2022
Julian announced a new-look board for his year at the helm. Llewellyn Leonard will act as president-elect, Karlien Kruger will be his secretary, with Joan Donet remaining as executive secretary for the website access it grants. Hannes Dressler, a CA and former treasurer of the Rotary Club of Moscow, will be treasurer and Dave Marshall will take over as Foundation officer.
Carl Chemaly has agreed to take over the membership portfolio. Gavin Atkins will be the projects head. 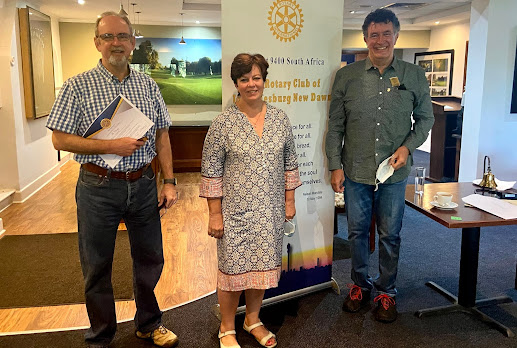 Gavin Atkins being inducted, with Karlien Kruger and president Ian Widdop
Gavin, a project manager by trade, was inducted into the club as the latest member. The charge was read out by Karlien Kruger, who brought him to New Dawn
Julian said he wants to involve as many members as possible more directly in the running of the club.
Remember that there will be a last meeting of the year this coming Wednesday. The first meeting in the new year will be on Wednesday, 13 January. This is my last blog of the year.
Have a great festive season and stay safe.
A Final Thought for the Year: Laughter is the sensation of feeling good all over and showing it principally in one place. - Josh Billings (1818 - 1885)
Posted by Mike Vink at 15:23