New Dawn in a Changing World

Meetings on Zoom are becoming old hat and there is already talk of having at least some meetings online once the coronavirus crisis has finally passed.
The advantage would be that meetings could become more inclusive and even international as it has been these past two weeks when first Nikolaus Turner of Germany sat in for Christoff Plate's induction and then Dirk Otto joined us last week from Barcelona in Spain.
We can be sure that post lockdown the world isn't going to be the same anymore.
Will our behaviour be the same? That's one of the questions raised by an additional visitor on Wednesday, Rudi Swanepoel, our first online speaker. Rudi said afterwards it had been a bit strange addressing a screen full of strangers, but most of those present would agree that he did a very good job of it.
He chose as his theme a discussion of how things could change post lockdown and said there are a number of possibilities, starting with: nothing will change, and things will just go back to where they were.
The fact is that this crisis marks the end of many certainties and their illusions. It is the end of the world where we think we are the centre of the universe.
The virus has brought a new awareness of peoples' living conditions all over the world, of the inequalities that exist in the world.
There is a growing awareness that things cannot remain the same, he said, but is there change? Are we seizing the opportunities that are being presented?
He told the meeting that he did not grow up with the notion that we are all part of one human family.
But, he said, we can only grow as human beings if there is growth in our actions, in the way we do things, and growth in how we act and do things differently once the lockdown is over.
The danger is to romanticise what is happening. We can't build a sustainable society on that.
The message was clear: if we want to build a better world, we can't just carry on doing things the same was as we have always done.
Following on from that, Paul Channon told the club that the Alexandra Education Committee had already spent all the money that New Dawn donated last week on feeding some of the 350 schoolchildren in the township that are part of their bursary scheme.
The club gave R35000 last week and managed to give another R15000 this week, largely because of a donation of R10000 from Dirk Otto in Barcelona and R1500 from David and Genevieve Jamieson in London. Gen is Jankees and Judy Sligchers' daughter. 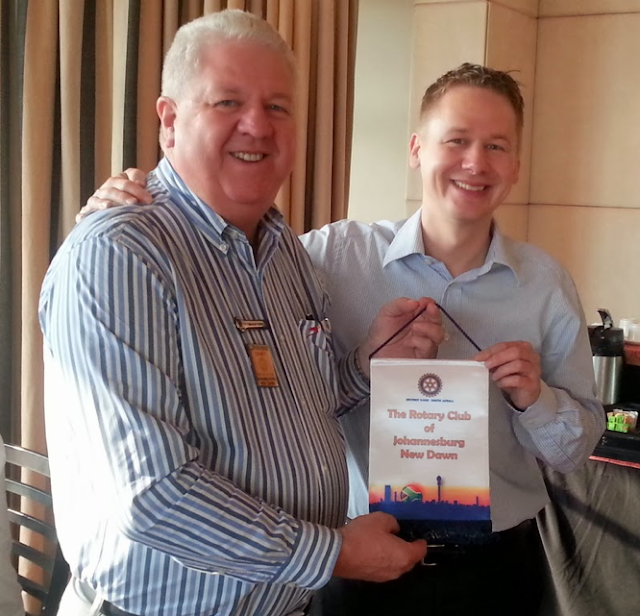 Dirk, a German by birth, is married to a South African and has been a visitor to the club in the past. He thought of us while discussing the lockdown with family in South Africa and decided to contact us again to see where he could help.
Dirk last visited New Dawn in August 2016 when I was president and before that in 2014 when he lived and worked in Chile in South America.
Ian Widdop told the meeting that Audrey Gatawa had handed over the reins of the sanitisation project to Sharon Fitzgerald of Benoni Aurora Club.  Their committee is spending the R500000 donated by Standard Bank and an extra R11000 donated by bank staff to sanitise taxis, taxi ranks and hand over hand sanitisers to commuters.
Audrey and Ian reported that the committee, made up of members from a number of Johannesburg clubs, has approached the bank for further donations.
Audrey reported that Standard Bank, her employer, has assigned her to another, even bigger project that has been taking up much of her time, so she has stepped down.
Remember: The next meeting next Wednesday falls on a fifth Wednesday so will be held at 6pm, rather than in the morning.  Our very own expert, Prof Lucille Blumberg, will be giving us an update on the coronavirus. To make it a bit more festive, wear a hat!
A Thought for the Week: Conscience is a dog that does not stop us from passing but that we cannot prevent from barking. - Nicolas de Chamfort (1741 - 1794)