Things Are On the Up in SA

President Cyril Ramaphosa's New Dawn is breaking and there is much to be optimistic about.
That was the view of the economist Matthew Matthee of PSG Wealth Rosebank in a presentation to the Rotary Club of Johannesburg New Dawn at the regular meeting at the Parkview Golf Club last Wednesday.
Matthee conceded that President Ramaphosa had come in for a lot of impatient criticism recently, culminating in the recent downgrade by ratings agency Moody's. But behind the scenes much is happening, he said.
It's too soon to tell if the efforts of the new regime will bear fruit. After GDP growth averaging 4.5% during the Mandela and Mbeki years, first the economic crisis of 2008/2009 and then 10 years of Jacob Zuma's presidency saw growth flatlining, then recovering to about 2,5% and finally settling at the current 0,9% level, which is catastrophic for the country and unsustainable.
Zuma started off his presidency with a promise of R800 billion in investment, but that all went into a bloated civil service and state salaries.
Ramaphosa inherited a sluggish economy with unemployment at 29%, the highest ever.
The solution would be to fix education, Matthee said.
Of the 1.24 million children starting school each year, only 687 000 end up with Matric. Only 17% of children going to university get a degree. That is why the unemployment rate amongst young people from 18 - 24 years old is almost 70%.
The second part of the solution would be to unlock business confidence and get companies, which have fared quite well in trying times, to start investing money in South Africa. This would also attract more foreign investment.
The first steps towards this have already been taken by efforts to reclaim the state from those who plundered it.
Examples are the Zondo commission into state capture; the Makgoro enquiry into the NPA as well as the appointment of Shamila Batoyi as Director of Public Prosecutions; the Nugent commission into the SA Revenue Services and the Mpati commission into the Public Investment Corporation.
New boards have been appointed at ten state owned enterprises including Denel, Transnet, Eskom, the PIC, NPA, SA Express, SARS, the SABC, Safcol and Alexkor.
He described the Moody's downgrade as a wake-up call, echoing Finance Minister Tito Mboweni's words that "South Africans must roll up their sleeves".
All in all, Matthee concluded, there's a lot to be optimistic about. 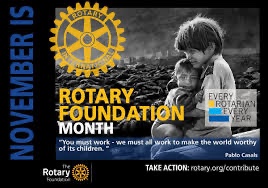 Foundation minute: November is Foundation month in Rotary, with the news that the Rotary Foundation has received the highest rating from Charity Navigator, an independent valuator of charities in the USA, for the 12th consecutive year.
The Foundation earned the recognition - four stars - for demonstrating both strong financial health and commitment to accountability and transparency. Only one percent of the organisations Charity Navigator evaluates, have received twelve consecutive 4-star evaluations.
PDG Francis Callard, a former district Foundation chair, is the speaker tomorrow and will tell us a bit more about the workings of the Foundation.
Festive Dinner: Arrangements are in full swing for the annual Christmas/Festive dinner. It's on Wednesday, 4 December this year and coincides with the visit of Sinterklaas, the Dutch version of Santa, who traditionally arrives in the Netherlands on 5 December.
The feast of St Nicholas has been celebrated for at least 700 years in the Netherlands. Many of today's traditions, such as the now controversial Zwarte Piet, date from the 1850s.
Up until the 1940s children would find a present in their shoe on 6 December, but over time the partying shifter to the night before, according to the website DutchNews.nl.
This year Dutch television and many Dutch towns have changed Zwarte Piet (originally a Moor from Spain) to Sooty Pete with a slightly dirty face from climbing down chimneys rather than full blackface make-up.
A Thought for the Week: Laughter is the sun that drives winter from the human face. - Victor Hugo (1802-1885)