You can tell how successful a club is by adding up all the little and many not so little things that members do away from the spotlight and away from meetings so that the rest of us don't always hear about it.
These past weeks have provided numerous examples such as Karlien Kruger's help with Dr. Nobs Motjuwadi and Copessa, Paul Kasango's involvement with the Woodside Sanctuary, Judy Symons' help at 5Cees, Lucille Blumberg's efforts at Hluvekani in Bushbuckridge and the work by Frayne Mathijs, Amina Frense and others at the Humanitarian Centre. 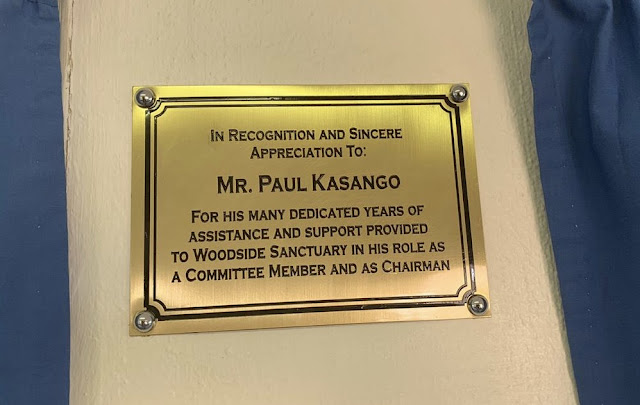 Another example is that Peta Thomas has been asked to serve as vice chairperson to the District Foundation Subcommittee for Rotary Peace Fellowships, where she'll be instrumental in vetting applicants for Peace and Ambassadorial Scholarships. 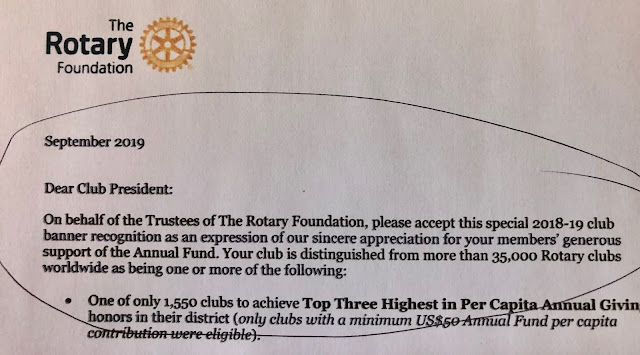 This is a significant achievement and apart from the clubs' own contributions, is fuelled by three club members: Jankees and Judy Sligcher and David Marshall.

Dave has asked to speak to the club on how he contributes because he sees it as a way in which other members can also give a little back.
PDG Jankees and President Judy have recently attained Major Donor status, significant because it means they have donated $10000 to the Foundation.
The club contributed fully to the $100 per member pay year (EREY) last year, as well as $1000 to the Polio Fund.
This means that out of some 35000 clubs worldwide, we are one of 1550 clubs to be the highest donor on their district. The minimum contribution to come into consideration is $50 per member.
New Dawn is also one of only 3400 clubs worldwide to be an Every Rotarian Every Year club, by giving $100 per member.
We are also one of only 4000 clubs where every dues-paying member has contributed at least $25 per annum to any of the Foundation funds.
These figures are remarkable not just for how we have maintained that level of giving, but also unfortunately how little the average club worldwide gives back to the Foundation. In D9400 only 5 clubs made any meaningful contributions.
It also means that we gain extra leverage when applying for global grants.
We get a special banner and to celebrate the event, DG Maurice Stander is planning to visit New Dawn in the new year for an official handover as well as officially recognising the Sligcher contributions.
Another significant milestone was the induction o the Interact club at theNational School of the Arts in Braamfontein.
Seven New Dawn members attended and a wonderful time was had by all.
The club has thrived due mainly to the mentoring of Graham and Joan Donet and the tireless efforts of Louise Simpson to get the group together and keep them focused on doing good deeds.
Louise, who has spoken at the club before, is in Matric and therefore not able to become the first president.
This honour goes to Makaziwe Makade, who will have the task of looking after about 20 Interacters next year.
Judging by the enthusiasm last Thursday and the quality of the performances on the night (they are arts students after all) the club will be both vibrant and creative at the same time.
It's that Christmas festive time of the year again and our thoughts turn to the annual Festive Dinner. There have been 54 acceptances so far so it promises to be a good turnout. Please do RSVP if you've not yet done so.
Amongst the guests will be Paul Channon, who by Wednesday should be our latest member, and Audrey Gatawa, a visitor last week who decided the Festive Dinner sounded too good to be true.
Audrey originally hails from Zimbabwe and works for Standard Bank. She told the club that she'd met a Rotarian from the Ivory Coast while on a work assignment in Mauritius, who recommended New Dawn to her.
Remember to bring small gifts for the Pink Elephant raffle at the dinner and to let me know if you plan any contributions for the festive table. Carol Stier is managing the decorations and decor, so speak to her if you can help.
There will also be an auction with some wonderful items such as s six-day holiday in St Francis on the Eastern Cape coast and signed copies of Ronnie Kasrils' latest memoirs.
Paul Channon is also bringing an armful of copies of the recipe book Gem to give to guests.
It was announced at the meeting last week that, following a board meeting on Tuesday, Tony Reddy's nomination as president to follow Ian Widdop, has been recommended by the board.
If there are any other nominations, it will be put to the vote. Remember however that you cannot nominate anyone without first asking them if they're prepared to stand.
The plan is that Tony will be secretary to Ian, where he can learn more about Rotary.
A Thought for the Week: For of all sad words of tongue and pen/ The saddest are these 'it might have been". - John Greenleaf Whittier (1807-1892)