Connecting the World With Rotary

Rotarians representing six countries were part of the meeting last week which President Judy Sligcher used as a Zoom vehicle to thank people from clubs all over the Rotary world for their contributions to the Alexandra Education Committee's Covid-19 project.
Paul Channon, a member of the Rotary Club of Johannesburg New Dawn and director of the AEC, told the remarkable story of Alexandra for the benefit of the virtual visitors.
The land on which the township stands was originally sold to black owners because it was so far away from the new gold mines in Johannesburg and just before the 1913 Natives Land Act which made it illegal for black people to own land in South Africa.
He also told of the stay of Nelson Mandela in Alexandra as a young law clerk.
Mandela visited his home after his release from prison, describing it as "no more than a shack, with a dirt floor, no heat, no electricity, no running water. But it was a place of my own and I was happy to have it."
Four overseas Rotary clubs contributed R100 000 to the AEC, which has managed to keep their scholarship students and their families going during the lockdown period with donations and food. New Dawn members contributed a further R50 000.
First up was the Rotary Club of Lindau-Westallgäu in southern Germany and the home club of new New Dawn member Christoff Plate of the Konrad Adenauer Foundation.
Club president Robert Gierer represented the German Rotarians along with six other members of the club, including Gabriele Donner, Martin Janthur (secretary), Albert Kirchman, Markus Lutterloh (president-elect), Nikolaus Turner, Bernd Paffenholz, Peter Rösler and Thorsten Knopf.
Strini Reddy represented the Rotary Club of Winnipeg in Canada and Dirk Otto joined in from Barcelona where he now lives with his South African born wife, Andrea.
Nick Bell is a familiar face at club meetings and lately also on Zoom and he was there with his club president, Greg Cooper, of the Rotary Club of Holt and immediate past president Terry Sands.
Genevieve Jamieson (Sligcher) also joined the meeting from the UK.
Also at the meeting was Val Hackett of the Rotary Club of Deerfield Beach in Florida, USA, who said their club had not been meeting during lockdown, but had resumed meeting every second week now that the lockdown has been lifted in the state.
Candice Harrison-Train of Forest Town, who had been a Rotary exchange student with the Rotary Club of St Catherines in Ontario, Canada, also joined. 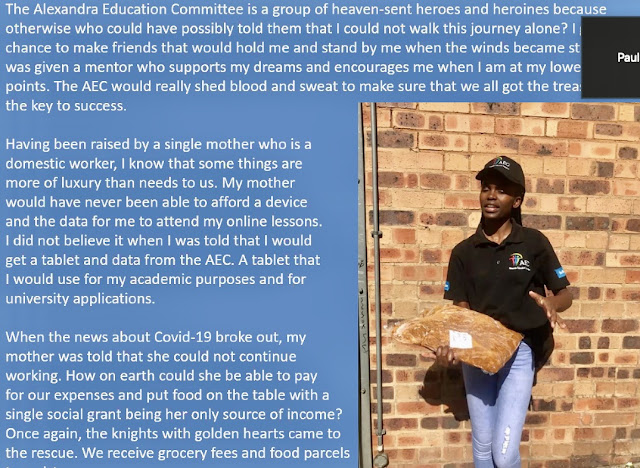 The most moving part of the presentation was the letters of appreciation that students sent to the AEC thanking them for their help in often very difficult and adverse situations, proof that we do make a difference in people's lives.
Last week the last of the 100 blankets that New Dawn collected  were handed out when PDG Jankees and President Judy Sligcher and Paul Kasango visited the Rena le Lona Creative Centre for Children in Diepkloof, Soweto, with them and a load of dry foodstuff for the children.
The centre had to close during lockdown, which means that the children were not getting the cooked meal every day that is provided.
The Community Corps of the now disbanded Soweto Rotary Club has been helping the centre to distribute food to the children and their families.
On Saturday District 9400 held the annual Discon on Zoom, with a number of New Dawn members in attendance, including the Sligchers, president-elect Ian Widdop, Amina Frense, Joan Donet and Peta Thomas. Jenine Coetzer admitted to peeking over husband Steve du Plessis' shoulder every now and then to catch up.
The electronic Discon was the first of its kind in Southern Africa and by all accounts a huge success, thanks in large part to the smooth technological input by Steve, a former club member. Steve was awarded a Paul Harris Sapphire during the meeting.
It was the 10th anniversary of District 9400 and obviously marked the beginning of Annemarie Mostert's year as DG. There are exciting times ahead!
New Dawn got a number of mentions during the five hours that Discon lasted.
PDG Jankees was one of the contributors to the 10 year celebration presentation prepared by PDG Francis Callard and wrote mainly about his Discon in the Kruger National Park two years ago.
Jankees was also thanked for his term as District Membership chair and that he and Judy are now Major Donors to the Rotary Foundation.
New Dawn also received accolades for having applied for and receiving a Covid-19 grant from the Rotary Foundation of $25 000.
A Thought for the Week: A hungry man is not a free man. - Adlai Stevenson (1900 - 1965)